In a hilarious, but entirely expected turn of events, socialist candidate and “future of the Democratic party” Alexandria Ocasio-Cortez was caught wearing a $3,500 outfit to a photo shoot designed to make her look like “one of the people:”

In a photo shoot for Interview magazine, Ocasio-Cortez was pictured wearing a $3,500 outfit as she posed with construction workers.​ She was decked out in a Gabriela Hearst blazer ($1,990), Gabriela Hearst pants ($890), and some Monolo Blahnik shoes ($625).

The story hit the pages of Reddit, prompting plenty of responses.

“I’ve never met a socialist who had the faintest idea of redistributing a penny of their own money. They’re all about taking all the time,” said one Redittor.

“As a barmaid she took all $500 of the tips after a holiday night at the bar, stiffing the waitresses with only $50,” said another. “She is only a socialist if she can take as much as she wants and leave the scraps for everyone else.”

Said yet another: “No, she’s a real socialist. This is what socialism is. You tell the people that they deserve more, and those stinky ‘rich’ people aren’t paying their fair share. Then you join the ranks of the elite, bu[y] expensive clothes, lake houses, Audis, etc., and you’re set. This is socialism. This is literally what it is.” 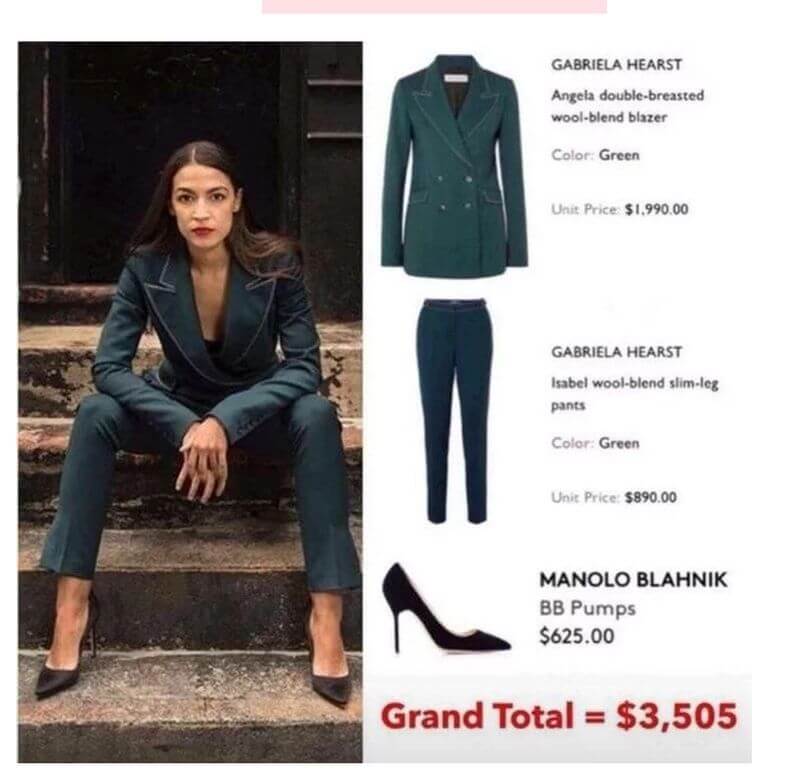 Shared misery for the masses, and $3,500 outfits for the ruling class.

Everyone should see this as it exposes what socialism is all about.