How well do you really know “A Charlie Brown Christmas”?

Is it possible that after all these years, you missed something extremely important?

A Charlie Brown Christmas first aired in 1965. It’s a staple of the Christmas season many of us grew up with. After so many decades, we may think we know it backwards and forwards.

Surprisingly, though, it’s only recently that people began to notice something about A Charlie Brown Christmas that was seemingly kept secret for years.

There is a secret message in what is arguably the most iconic scene in the Christmas special, hidden in plain sight.

Throughout the episode, Charlie Brown is disillusioned by the commercialization of Christmas and the constant complaining of his peers. He thinks he can make things right again with a Christmas tree, but he’s scorned by his friends for ruining the upcoming Christmas play with a little sapling instead of “a great big shiny aluminum Christmas tree.”

“Everything I do turns into a disaster,” he says before loudly pleading, “Isn’t there anyone who knows what Christmas is all about?”

Linus, who sucks his thumb and is inseparable from his security blanket, speaks up.

Most of us know this scene very well. But did we miss something? Watch it again, and wait for Linus to say “fear not!”

Throughout the Peanuts, it’s clear that Linus has a dependency on his security blanket. Nobody can tear him away from it, though they often try.

As mentioned throughout the Peanuts strips, Linus may recognize that he depends on the blanket too much, but it offers him a sense of security. It keeps him from being afraid. But when he says “fear not,” he finally drops it. 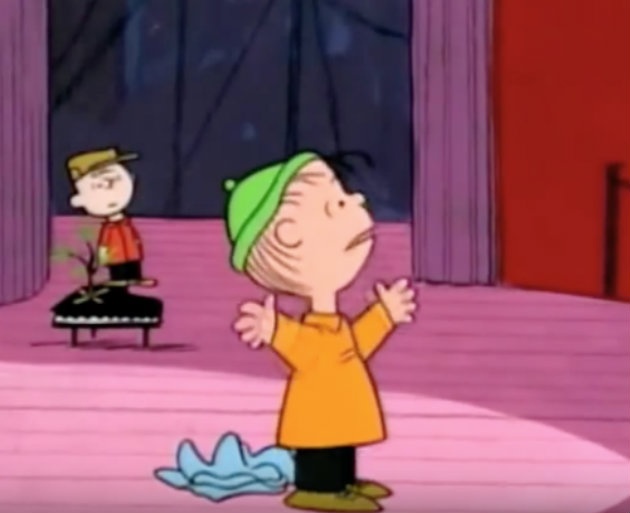 Charlie Brown is best known for his uniquely striped shirt, and Linus is most associated with his ever-present security blanket. Throughout the story of Peanuts, Lucy, Snoopy, Sally and others all work to no avail to separate Linus from his blanket. And even though his security blanket remains a major source of ridicule for the otherwise mature and thoughtful Linus, he simply refuses to give it up.

Until this moment. When he simply drops it.

In that climactic scene when Linus shares “what Christmas is all about,” he drops his security blanket, and I am now convinced that this is intentional. Most telling is the specific moment he drops it: when he utters the words, “fear not.”

Looking at it now, it is pretty clear what Charles Schultz was saying, and it’s so simple it’s brilliant.

The birth of Jesus separates us from our fears.

The birth of Jesus frees us from the habits we are unable (or unwilling) to break ourselves.

The birth of Jesus allows us to simply drop the false security we have been grasping so tightly, and learn to trust and cling to Him instead.

Surely, Schultz knew what an important moment this was in the episode.

It is a turning point in the episode, marked by the angelic message “fear not” and Linus, taking the words to heart, dropping his security blanket on the floor.

Charlie Brown’s mood changes drastically after Linus’s speech. He grows more determined, and doesn’t let the commercialization of Christmas, or the ridicule of his friends, ruin his Christmas. He decorates his sapling, quite well, and the play is saved.

Did you notice this before?

Tell us in the comments below.