The cartoon below clearly illustrates exactly who’s responsible for bringing politics into sports and using it to divide people. 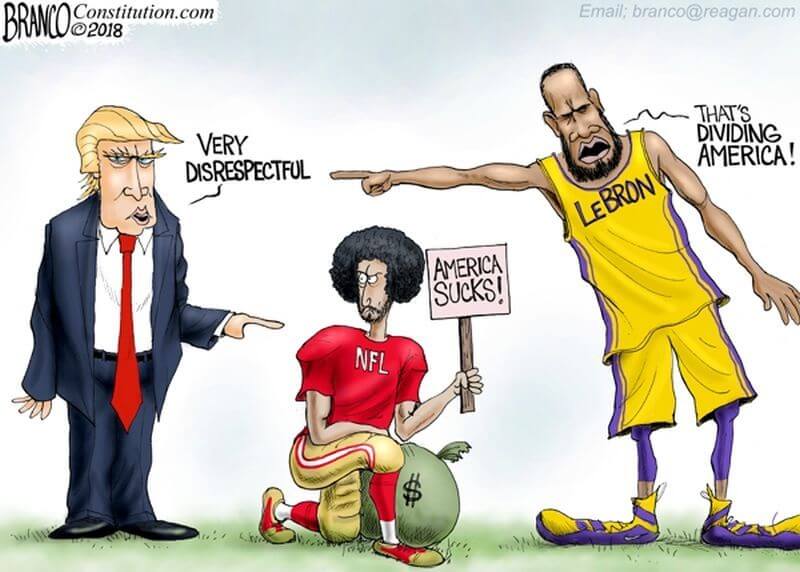 LeBron claims it is President Trump’s fault for bringing politics into sports but the truth is it was Colin Kaepernick and his spoiled rich millionaire player buddies that caused the problems.

NFL Kneelers Get Put in Their Place After Anthem Policy Change

Actor James Woods just put NFL kneelers in their place after the league suspended the new rule requiring players to stand for the anthem.

This policy change occurred after the players association protested the new rule.

Of course all this does is further alienate the NFL from their fans.

Most football fans are patriotic Americans who don’t appreciate a bunch of crybaby millionaires stomping on the same country that made them rich and famous. 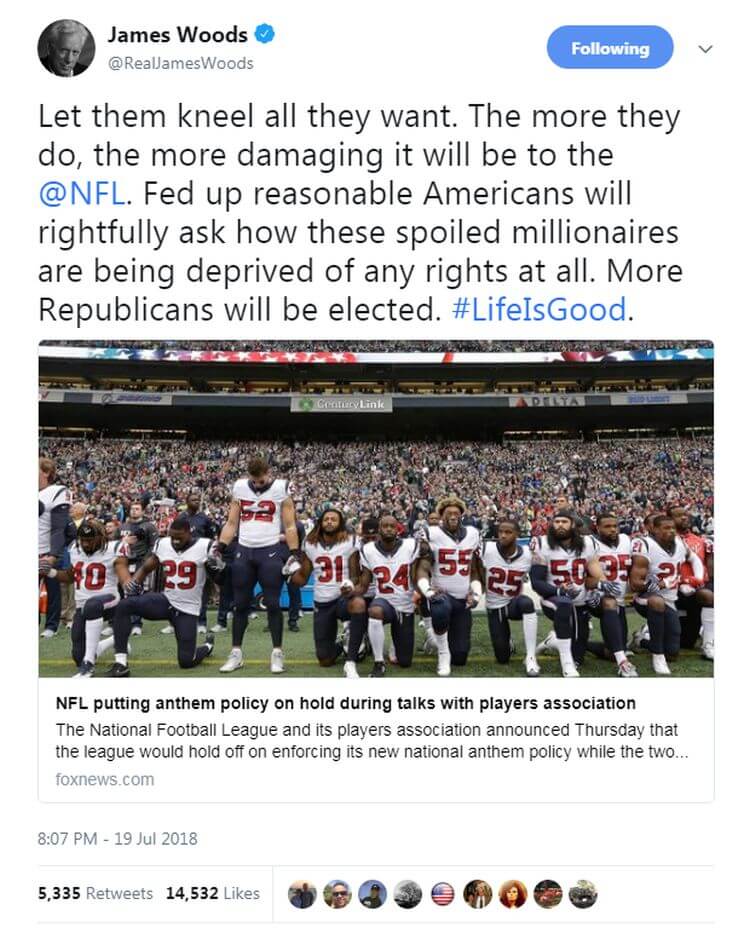 The more NFL players throw a hissy fit over the anthem, and the league caves, the more viewers are lost and the more Republicans are elected.

More on this rule change:

The NFL’s two-month old national anthem policy is on hold.

Hours after The Associated Press reported that Miami Dolphins players who protest on the field during the anthem could be suspended for up to four games under a team policy issued this week, the league and the players union issued a joint statement late Thursday night saying the two sides are talking things out.

“The NFL and NFLPA, through recent discussions, have been working on a resolution to the anthem issue.

In order to allow this constructive dialogue to continue, we have come to a standstill agreement on the NFLPA’s grievance and on the NFL’s anthem policy.

No new rules relating to the anthem will be issued or enforced for the next several weeks while these confidential discussions are ongoing,” the statement read.

“The NFL and NFLPA reflect the great values of America, which are repeatedly demonstrated by the many players doing extraordinary work in communities across our country to promote equality, fairness and justice.

Our shared focus will remain on finding a solution to the anthem issue through mutual, good faith commitments, outside of litigation.”

The issue has dominated headlines over the past two seasons, caused division and alienated some fans.

The NFL rule that was passed in May forbid players from sitting or taking a knee if they are on the field or sidelines during “The Star-Spangled Banner,” but allowed them to stay in the locker room if they wish.

The policy said teams would be fined if players didn’t stand during the anthem while on the field. The league left it up to teams on how to punish players.

None of the team policies had been made public until the AP obtained a copy of Miami’s nine-page discipline document. It included a one-sentence section on “Proper Anthem Conduct” and was provided to the AP by a person familiar with the policy who insisted on anonymity because the document is not public.

It classifies anthem protests under a large list of “conduct detrimental to the club,” all of which could lead to a paid or unpaid suspension, a fine or both.

Hopefully the league gets a grip, or they should expect a further decline in their ratings.