Democrat Georgia gubernatorial candidate Stacey Abrams, who cannot concede defeat, was dealt a severe blow in her quest to steal the election in her state.

A judge gave her a partial win by saying that the secretary of state should not certify the results of the election until absentee ballots on which the date of birth of the voter is either missing or incorrect be counted.

But the victory for her Republican opponent Brian Kemp is that the judge said that counties do not have to accept those ballots, The Hill reported. 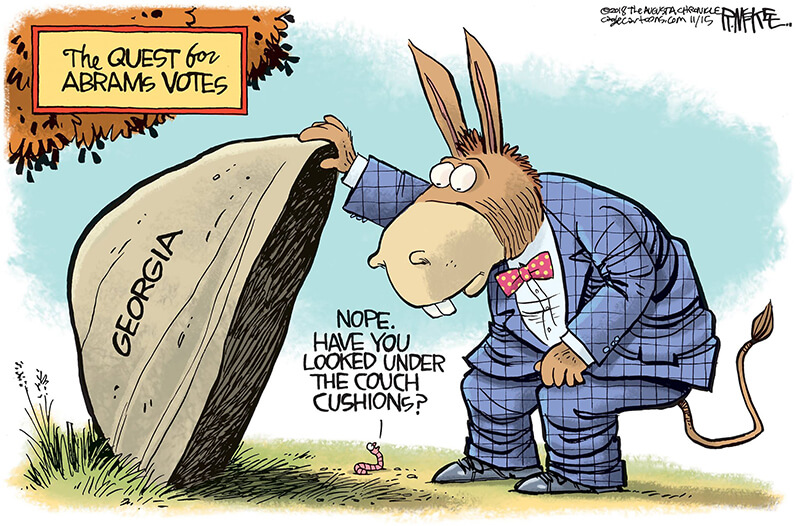 Both Democrat Stacey Abrams and Republican Brian Kemp are celebrating victory in the Georgia governor’s race after a split decision by a federal judge on Wednesday.

U.S. District Judge Steve Jones ordered that the secretary of state’s office not certify results until absentee ballots on which the voter’s date of birth is missing or incorrect are counted, siding with Abrams’s campaign.

“This is a major victory for Georgia voters and the Abrams campaign in the fight to ensure every eligible vote is counted and every voice is heard,” she said, according to USA Today.

Jones sided with Kemp’s campaign on two counts, however. Counties will not be required to accept absentee ballots with incorrect addresses or provisional ballots cast by people who tried to vote in the wrong county.

“Tonight, ‏Judge Jones rejected efforts by Stacey Abrams and her radical allies to undermine the democratic process and rule of law in Georgia,” said Kemp’s communications director, Ryan Mahoney. “He denied her requests to create new voters and slammed the door on attempts to count illegal votes.”

“This ruling solidifies Brian Kemp’s insurmountable lead. The election is over and Kemp is the Governor-elect. It’s time for Abrams to concede and join our efforts to keep Georgia moving in the right direction,” Mahoney added.

The Associated Press has yet to call the race.

Abrams’s campaign has expressed confidence that uncounted or incorrectly labeled ballots can bring Kemp’s vote total under 50 percent, which would automatically trigger a run-off election.

Kemp currently holds a slim lead of 50.3 percent to the Democrat’s 48.8 percent, and he has urged Abrams to concede, calling her refusal to do so “a disgrace to democracy.

Georgia’s gubernatorial race was marred with accusations of voter suppression aimed at Kemp, who stepped down as the state’s secretary of state and elections chief after the election. He had faced repeated calls and legal challenges urging him to resign his post or recuse himself from any matters related to the election because of his candidacy.

It is time to quit Stacey.