The hilarious cartoon shows the “disaster” that Democrats face today as result of their non-stop “the sky is falling” routine: 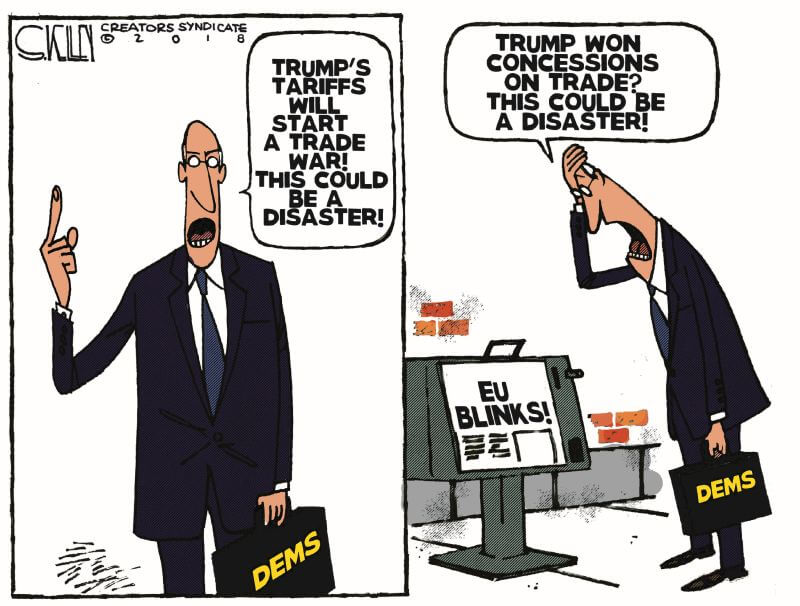 We have the largest economy in the world, by far, and it’s about time a President used the natural leverage we have to level the playing field.

For too long other countries have taken advantage, but those days are done, thanks to President Trump.

Even better, the latest GDP news shows the economy is booming under this president’s policies:

The U.S. economy grew at the strongest rate in roughly four years in the second quarter of 2018, matching economists high growth expectations heading into Friday’s announcement.

Gross domestic product–the total value of all final goods and services in the U.S. economy–grew at a 4.1 percent rate in the second quarter, propelled by an increase in consumer spending, exports, federal and local government spending and business investment, according to the Bureau of Economic Analysis.

Economists expected second quarter figures to hit levels as high as 5 percent, which would have been the highest second quarter growth rate since 2014. Preliminary numbers generally pegged growth close to Friday’s actual figures.

President Donald Trump promised the “best financial numbers on the planet” leading into Friday’s roll out, adding that it was great to have the U.S. “winning again.”

Our Country is doing GREAT. Best financial numbers on the Planet. Great to have USA WINNING AGAIN!

Economists attributed the president’s tariffs for up to 1 percent of the total expected growth in the second quarter leading up to Friday. The consensus was that an increase in consumer spending from the first to the second quarter, along with a narrowing trade deficit, helped propel the economy to higher levels of growth. U.S. exports rose in the second quarter, while imports remained relatively stagnant.

The expectations of a narrowing trade deficit were spot on, with net exports adding 1.06 percentage points to the 4.1 percent GDP growth. Overall, net exports rose robustly.

Consumer spending also fell in-line with predictions, with personal-consumption spending rising at a 4 percent annual rate in the second quarter. As a percentage of GDP, consumer spending accounts for over 66 percent of the nation’s economy.