The hilarious and accurate meme below offers the best definition of “Trump Derangement Syndrome” we’ve ever seen:

President Trump did not make liberals insane his election simply helped bring it out into the open.

Congresswoman Maxine Waters recently advocated that people harass every member of the Trump administration, making it virtually impossible for them to live normal lives simply because she disagrees with their politics. The dangers to everyone involved in this kind of thing and the threat to our civil society are obvious.

Well, she apparently couldn’t see one step ahead, because she is now being protested at her office — and she’s warning her supporters to stay away. Apparently she’s concerned they might do the things she advocated, but to her. 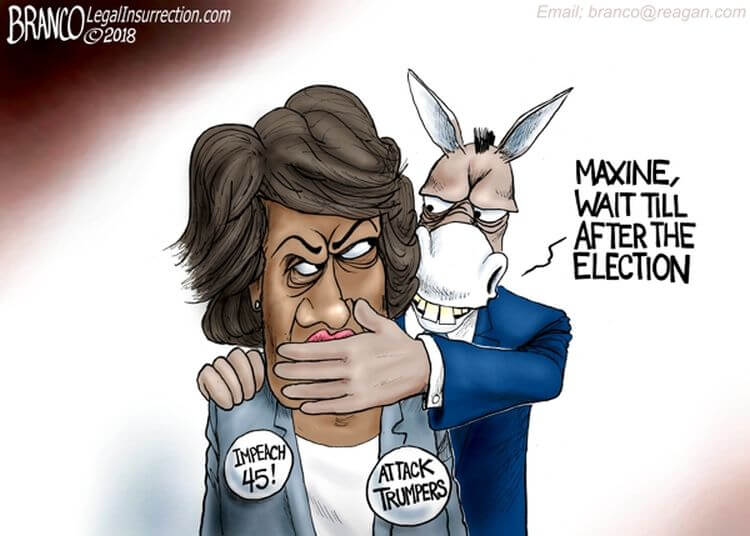 Maxine Waters is all for people targeting Trump administration officials and conservatives, at least until she’s a target:

Waters is warning supporters that it will potentially be an “armed protest” because of the Oath Keepers’ pro-gun stance and the fact that they have carried firearms at other demonstrations. Of course, protesters who are legally carrying firearms are far less of a safety threat than protesters who show up with clubs and a mask.

Why didn’t Waters consider that her supporters whom she told to hound elected officials in public were confronting armed people, too? Where was this concern about violence when she supported screaming at families while they eat dinner?

Waters loves the idea of people being faced with vehement — and even intimidating — protests over their positions, except when she’s the target.

Progressives tend to be that way.

Violence is fine when Antifa is burning Berkley, but if guys who own guns say they’re going to protest (note the word “protest,” not “attack”) at a progressive lawmaker’s office — as legitimate a place to demonstrate against that lawmaker as you’ll find — then suddenly society is breaking down.

To claim it’s unsafe for her supporters is a smear.

Any violence that would erupt would likely come from her pro-violence supporters who counter-protest and couldn’t deal with people not backing meekly away. Recent history demonstrates that result.

“Mad” Maxine Waters is getting a dose of her own medicine and while it’s glorious to see, we do not condone political violence of any kind.

People like Maxine Waters and the violent leftists that protested outside her office are despicable people and should be driven from the public square, by being condemned then ignored.