Conservative activist James Woods tweets a truth about cities run for generation by Democrats that the media refuses to report on.

The fact that every single major city run for any length of time by Democrats has turned into shitholes with large homeless populations and other major issues. 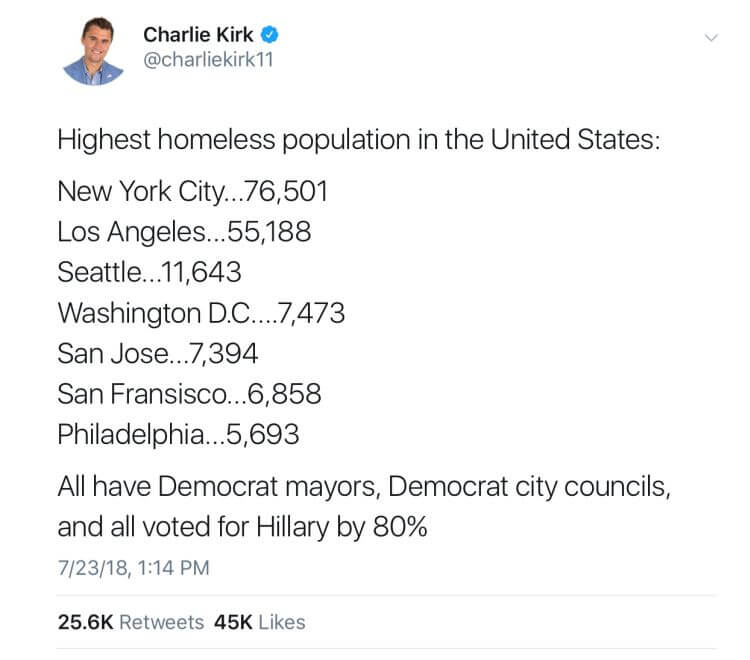 He then went on to observe that driving through the country really hammers this point home: 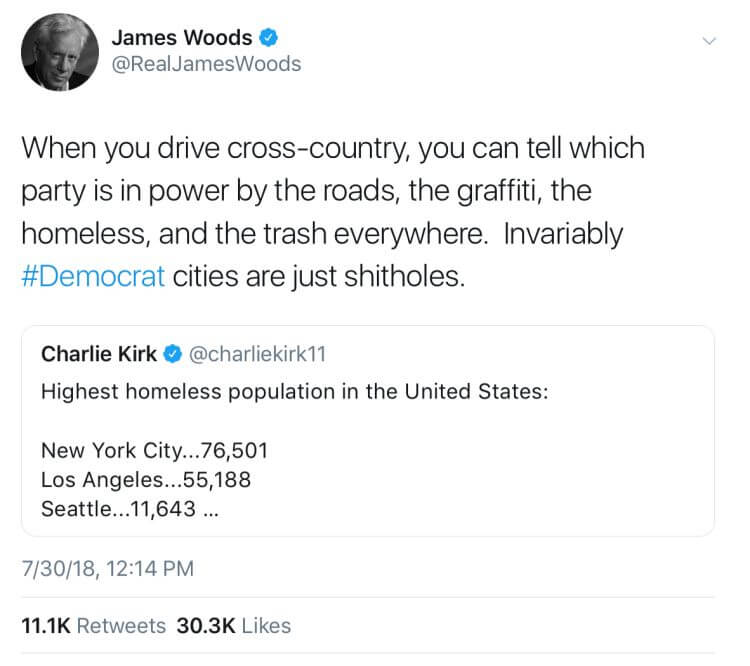 Cities run by Democrats, like San Francisco have become literal shitholes with streets lined with human feces and discarded syringes.

While liberal run cities like San Francisco are decaying at least politicians in those cities are focused on cleaning up the mess, or not…

Once again proving California is on the forefront of liberal insanity and total government control over everything the city of San Francisco is looking into banning company sponsored free lunches.

The reason why is even more insane than the law itself:

Lavish free lunches are the stuff of Silicon Valley legend, and a treasured perk in the roster of on-campus benefits that tech companies use to lure workers.

But two San Francisco legislators are looking to do away with the practice, saying it hurts local businesses who can’t compete, reports CBS San Francisco.

“We see thousands of employees in a block radius that don’t go out to lunch and don’t go out in support of restaurants every day,” said Ryan Corridor, owner of Corridor, a restaurant blocks from San Francisco’s city hall. “It’s because they don’t have to.”

On the other hand, when Square, a nearby payment processing company, closes its cafeteria every other Friday, Corridor sees such a surge it sometimes has to increase its staffing, the San Francisco Chronicle reported.

“You can’t compete with free. Free food is a wonderful amenity but doesn’t do anything to extend the community around it,” said Gwyneth Borden, executive director of the Golden Gate Restaurant Association.

They insist the city has the legal right to do this through a zoning amendment using certain planning and public health codes.

“This is the beginning of a conversation,” said Safai. “We think it’s an appropriate conversation to have now.”

If passed, this new law would only apply to new companies, not existing companies in the city like Google, Twitter and Levi Strauss & Co.

There are currently 51 such employee cafeterias in San Francisco.

Safai painted the measure as a boon to work-life balance. “This is also about a cultural shift,” he told the Chronicle. “We don’t want employees biking or driving into their office, staying there all day long and going home.

This is about getting people out of their office,” he said.

Once again, in California, liberal insanity rules the day.

Who is John Galt?