It seems that impeachment may not be going exactly as well as House Intelligence Chair Adam Schiff had hoped.

Fox News reported that after Schiff left the Senate chamber after arguing for the President’s removal he was heckled by a group of angry citizens who called him a liar and told him to move to Venezuela:

Adam Schiff was bombarded with a small crowd calling him a liar and they demanded he move to Venezuela! pic.twitter.com/XSI8ORyeYk

Adam Schiff has not even started to get what he really deserves, which is a swift removal from power come this November.

President Trump definitely agrees with this tweeting “Adam Schiff is a CORRUPT POLITICIAN, and probably a very sick man. He has not paid the price, yet, for what he has done to our Country!”

Shifty Adam Schiff is a CORRUPT POLITICIAN, and probably a very sick man. He has not paid the price, yet, for what he has done to our Country!

This of course led to accusations from Schiff himself, and others that the President was threatening him:

“Look at the president’s tweets about me today saying I should pay a price..”

“Do you take that as a threat?”@RepAdamSchiff — “I think it is intended to be.” pic.twitter.com/zss2mkDiZU

Chuck Todd asked Schiff “What do you make of the criticism that some Republican senators didn’t like your head on a pike comment. Murkowski, Collins and Ernst, all three who might be open to witnesses thought you might have got too personal.”

Shifty Schiff responded in his usual fashion by evading responsibility and tried to turn the question against the President “I don’t think it was personal to refer to the CBS story. What may be personal, and I think I have to be very candid about this, is I made the argument that it’s going to require moral courage to stand up to this president. And this is a raffle and vindictive president. Look at the president’s Tweets about me today saying that I should pay a price.”

Democratic party operative with a byline Chuck Todd went along with Schiff and asked “Do you take that as a threat?”

Schiff then cranked up the ridiculous rhetoric “I think it’s intended to be. But look, it is going to be very difficult for some of these senators to stand up to this president. It really is.”

“And if this weren’t an issue, there wouldn’t be an issue about calling witnesses. If we can’t even get the senators to agree to call witnesses in a trial, it shows you just how difficult that moral courage is.”

“The President has a tendency to say things that seem threatening to people… he really ought to get a grip and be a little more presidential.” House impeachment manager @RepZoeLofgren reacts to President Trump’s latest tweet targeting Rep. Adam Schiff. #CNNSOTU pic.twitter.com/Mz8gLJPPeM

Adam Schiff is a disgrace and he along with Nadler, Pelosi and the rest of their band of power thirsty bottom dwelling Democrats need to be removed from the majority in the House this coming November.

They have proven beyond a shadow of a doubt that they cannot behave responsibly or in the best interests of the voters. 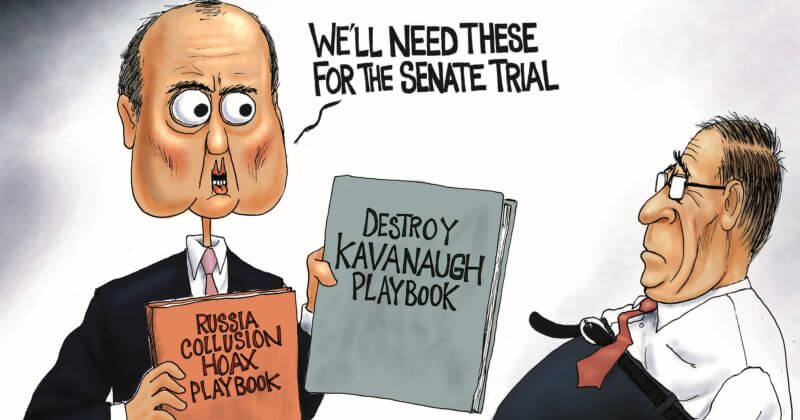