The cartoon below brilliantly explains why “Trump Derangement Syndrome” is all that the poor pathetic Democrats have as a message this November. 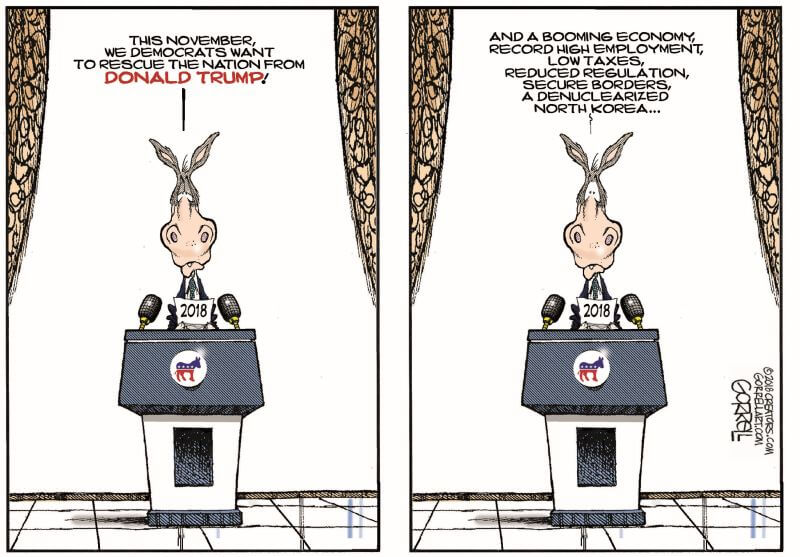 Clearly, given the success the Trump agenda and approach has had on the economy and abroad, there is nothing else for them to run on.

Other than “millions will die,” “Trump’s a racist and misogynist,” “Trump’s a Russian mole” and the rest of their made-up nonsense they have no message.

Here’s what happens when Democrats try to run on a “message” other than TDS:

Nancy Pelosi Makes Fool of Herself in Presser; Bungles 20 Words

Maybe the summer heat is getting to her, but the House Minority Leader, Nancy Pelosi, was surely struggling in her weekly press conference today.

While firing off attacks at the president and House Republicans, Pelosi’s mouth seemed to be moving faster than her brain. She bungled no fewer than 20 words during this brief press conference.

Kicking things off, Pelosi said Republicans are bailing out “special interest,” only she struggled to say “interest.” And that was just the beginning. Overall, Pelosi stumbled over the following words:

Overseas (she pronounced it: “overshees”)

Apprehensions (she meant to say “aspirations”)

At other points, Pelosi began sentences that seemed to trail off into oblivion, never completing her thought. At one point she said, “Over the coming weeks, House Democrats will …” then appeared to forget what she was saying.

Overall, Thursday’s press conference was not Pelosi’s finest moment. See for yourself in the montage above.