The women who were filmed screaming at Arizona Senator Jeff Flake and quickly became a liberal “heroes” were just identified as a Soros plants:

The screaming leftists cornered the Arizona Republican at the US Capitol Friday morning as he made his way to the Senate Judiciary Committee hearing where, he’d just announced, he would be voting to confirm Supreme Court nominee Brett Kavanaugh.

With Flake trapped in the elevator, the women berated him for his intended vote supporting Kavanaugh, screaming, “This is not tolerable!”

“You have children in your family. Think about them! I have two children. I cannot imagine that for the next 50 years they will have to have someone in the Supreme Court who has been accused of violating a young girl. What are you doing, sir?!” one of the women yelled while blocking the elevator door.

Flake silently listened, nodding occasionally before escaping to the Committee hearing where, after private meetings with Senate Democrats, he gave the left what they wanted. Flake announced to the panel that he would only vote for Kavanaugh if the Senate vote was delayed and another FBI investigation was allowed to be conducted.

And as liberals cheered the news, it was soon clear that the screaming women by the elevator were actually Soros-funded astroturfed activists.

Shortly after the incident with Flake, Ana Maria Archila and Maria Gallagher were caught celebrating: 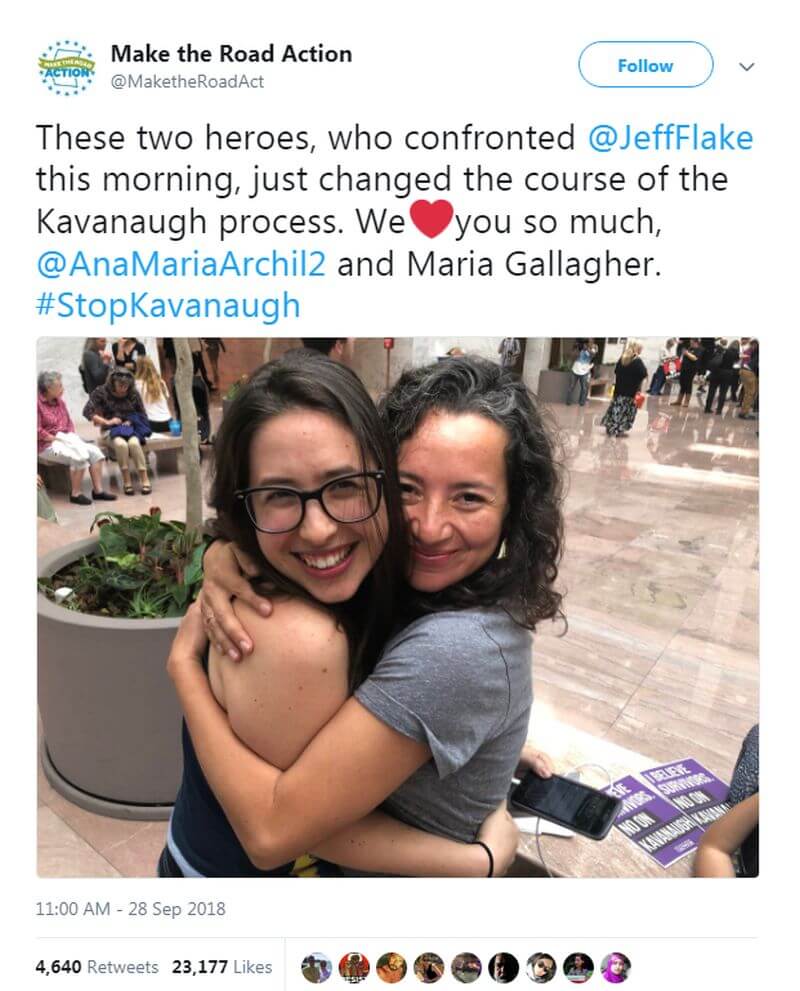 Archila even wrote about the incident with Senator Flake:

“Shortly after, CNN reported that Flake was visibly shaken after his encounter with us. Our words, and the words of thousands of women who have shared their stories, moved him.”

Who could have ever predicted that George Soros would be paying people to intimidate and confront Republicans?