By now most everyone knows that the media has declared Joe Biden and Kamala Harris the winners of the 2020 presidential race.

The only problem of course is that the media does not get to decide who the winner is.

They say a picture can be worth a thousand words so here is how we view the Biden / Harris claims of victory brutally summed up by a single cartoon: 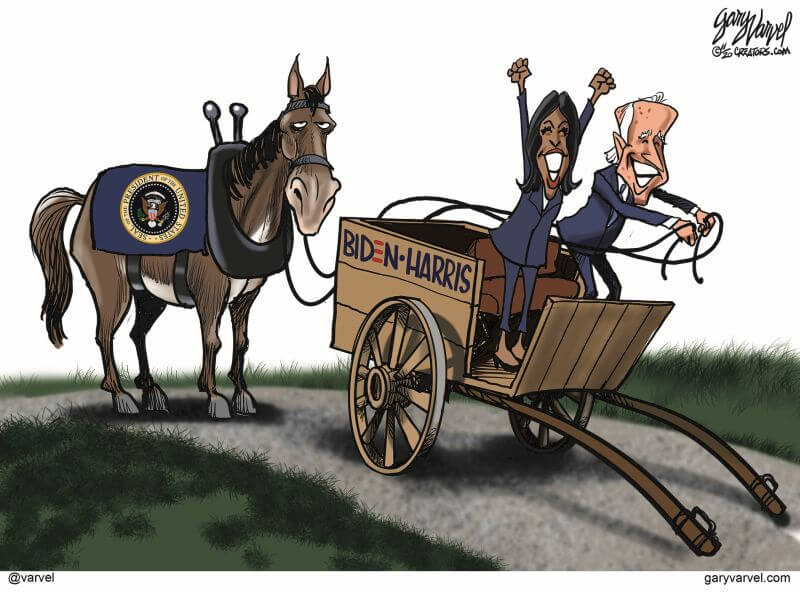 The media and Democrats are putting the cart before the horse.

Joe Biden is not the winner of the election until all of the legal challenges are exhausted or unless President Trump concedes.

Fox News Calls it For Biden, But the Media And Big Tech Do Not Get to Decide The Presidency by Ryan Ledendecker

On Saturday morning, after nearly a week of delayed vote counts and rampant speculation of potential ballot and voter fraud in a number of key swing states, the mainstream media made the call that supporters of President Donald Trump have dreaded — that Joe Biden is now the president-elect.

According to Fox News, the network’s decision desk called the crucial state of Pennsylvania for Biden, though like other states, the former vice president’s lead was less than impressive. That call put Biden over the 270 electoral college votes needed to claim the White House.

As expected, Facebook and Twitter quickly shared the news on their platforms, informing users that Biden and Sen. Kamala Harris won the election.

Biden was quick to claim the media-gifted victory in a statement to further lay the groundwork for his presidency.

“I am honored and humbled by the trust the American people have placed in me and in Vice President-elect Harris,” Biden said in a statement. “In the face of unprecedented obstacles, a record number of Americans voted. Proving once again, that democracy beats deep in the heart of America.”

Of course, Biden couldn’t resist the opportunity to take a jab at Trump.

“With the campaign over, it’s time to put the anger and the harsh rhetoric behind us and come together as a nation,” he added.

But there’s one key aspect to this situation that neither big tech or the Biden-favoring mainstream media took much time to clarify, and that is the fact that it’s not over until it’s over. Contrary to what they’d like you to believe, the media doesn’t determine who becomes president.

They’re simply using their projections to determine that as of this point, Biden has the required number of electoral votes needed to clinch the White House. But many on Trump’s legal team, GOP politicians and others in Trump’s orbit have firmly stated that until all allegations of voter and ballot fraud are ruled on by the court — possibly even the Supreme Court — Trump is still very much the president and could possibly retain a second term.

That’s not to mention the high likelihood of mandatory vote recounts in states like Georgia, which are currently sitting on razor thin margins. Hypothetically, if only a few of these key swing states end up going in favor for the president, it will literally change the national conversation overnight.

And that would mean the mainstream media would crumble, quickly. Fox News already took heavy fire from their otherwise loyal viewers for what many have claimed was a grossly premature call in Biden’s favor for the state of Arizona.

Should Trump’s legal team begin to emerge victorious in a series of ongoing legal battles, this situation still has the technical possibility of rapidly changing.

The mainstream media networks, at that point, would have an unprecedented amount of explaining to do at that point and I can only imagine the reaction from the public should this situation end up favoring Trump. It’ll be absolutely wild.