For the past few weeks America has been engulfed in violent protests and riots.

Those involved claim to be protesting against police brutality and racism but at this point it’s hard to know what the “protesters” really want, or what their end game really is.

What is obvious though is how the President is dealing with the crisis versus how Democrats are responding. 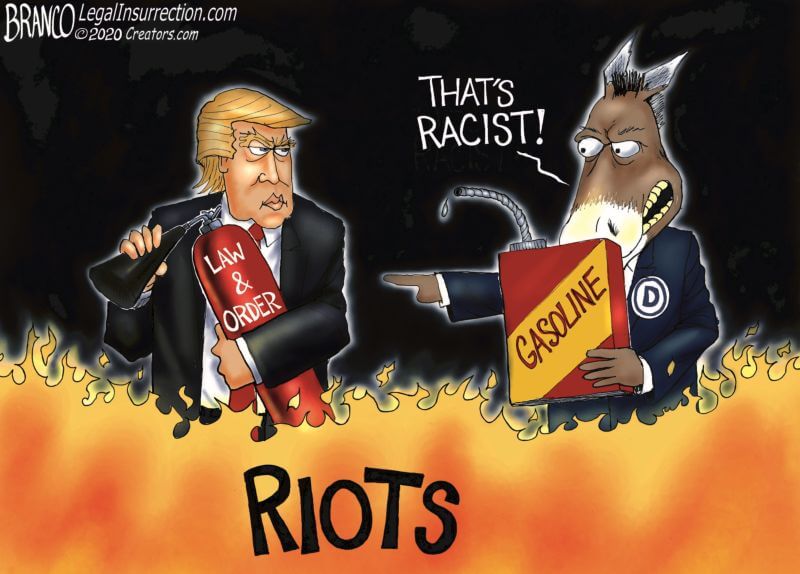 Does that about sum the whole sordid thing up?

President Trump is trying desperately to calm the situation while Democrats and their media allies continue to pour fuel on the fire.

Sad, pathetic but entirely predictable and exactly why Democrats need to be kept far away from any elected office.

Senior Dems in fact know that the “defund the police” slogan is turning off independent voters all across the board.

Dem Rep. and CBC Chair Karen Bass: ‘Defund Police’ Is Probably One of the Worst Slogans Ever

Today, during an interview with the Washington Post. Democrat party Congresswoman and Congressional Black Caucus chair Karen Bass tried unsuccessfully to convince average voters that the “defund the police” movement is not as scary or as dumb as it sounds.

She tries to get people to believe that it makes sense to have social workers respond to many of the incidents where police officers currently get involved.

Discussing the “defund the police” movement she began by saying ” “I told some friends that that’s probably one of the worst slogans ever, but anyway, you know, police officers are the first ones to say that they are law enforcement officers, they are not social workers.”

“What we have done in our country is we have not invested in health, social and economic problems in communities, and we lead the police to pick up the pieces. So, in my city, for example, on any given night we have over 40,000 people who are homeless. Why should the police be involved with that?”

“So one of the main points that I believe the ‘defund movement’ is making is that cities and states, their priorities are lopsided. So a large percentage of the city budget goes to law enforcement.”

“They’re saying, ‘Why doesn’t the city deal with social problems so not so much money would have to go to law enforcement?”

Of course what these people will quickly discover, should they ever move forward with “defunding the police” is that social workers are not equipped to deal with some of the real life dangers encountered during the course of dealing with many homeless issues or neighbor disputes.

Usually by the time the police have been called the situation has escalated belong what a social worker can typically handle.

All this defund the police talk just shows that Democrats should never be allowed to run anything. Ever.