What we have learned over the past decade is that there is no low too low for Democrats to go in their quest to gain and retain power.

They do not care what happens to the people of this country and especially to those who oppose them.

They have increasingly resorted to political violence via Antifa and constantly incite their supporters with baseless claims of racism, hate, dictatorship, Russian collusion and more.

Here in one brutal cartoon is exactly what Democrats have done to Trump supporters and those who oppose them or stray from the liberal plantation: 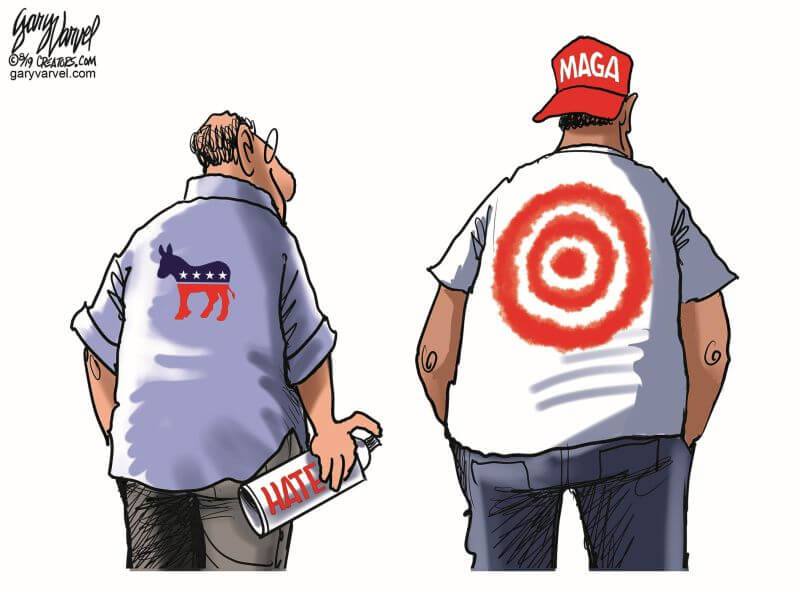 Sadly that sums it up perfectly.

If you support President Trump then Democrats have put a target on your back and made you fair game to any of their crazed and insane supporters.

Despicable and we hope someday they pay a price for their actions, but based on what we’ve seen so far, it seems doubtful.

It seems Democrats rarely pay any price whatsoever for their nefarious actions, words and deeds.

Jahangir “John” Turan, 42, says he was viciously attacked by a group of New York teenagers Tuesday evening for wearing a ‘Make America Great Again’ hat, which he had purchased earlier that day at Trump Tower.

On Thursday, Turan held a news conference to request that the NYPD find the teens responsible for his horrifying injuries.

Now, it’s quite possible that the whole thing is a hoax. So far, there doesn’t appear to be any direct evidence that the attack occurred except for Turan’s injuries. No eye witnesses or video surveillance has been talked about in the case, and may not even exist.

As in any similar case, we should hold off on a final judgment until all the facts are known.

A man claims he was attacked by a group of teens because he was wearing a “Make America Great Again” hat.

It happened at 6:50 p.m. Tuesday on Canal Street near Greene Street in Manhattan.

Jahangir Turan, 42, claims he was walking down the street when he was accosted by more than a dozen teens for wearing a MAGA hat. His attackers allegedly shouted vulgarities about President Donald Trump as he was being attacked.

A New York City art gallery owner says he was viciously beaten in Manhattan by a large group of teens for wearing a “Make America Great Again” hat. …

He says the group of about 15 “kids” yelled “F*** Trump” and stomped on him. One of them smashed his head into a scaffold. Turan says he suffered a fracture in his cheek and a badly swollen eye. He’s awaiting an eye specialist to determine if there is any permanent damage to his sight. …

“It’s sad to get beat up for wearing this hat. This is America,” Turan said.

Notice how it’s only local stations covering this story, with nothing being said from the mainstream media. Yes, that’s not an accident.

Put simply, they don’t WANT to cover it. Surprise, surprise.

And even if it is a hoax, then the best way to get to the bottom of the story is to publicize it so the truth gets out. Isn’t that what happened in the Jussie Smollett case?

Steve Straub
Steve has been involved in national politics for over 20 years and helps run one of the largest conservative opinion and analysis sites in the country.
Twitter Fact-Checks President's Tweets For First Time, Trump Hits Back HARD
MSNBC Reporter Busted Trying to Shame Folks for not Wearing Masks When Half His Crew Wasn’t Wearing One
Grenell Declassifies Final Batch of Russia Files as Ratcliffe Takes the Helm
John Kennedy Claims Western Leaders Have Been 'Weenies' With China For Years: 'Weakness Invites Wolves'
New York Post Defends Press Secretary Kayleigh McEnany, Tells Media to "Stop Whining" and "Get Over Yourselves"
See more...