We’ve been hearing from a lot of Democrats lately that the “protests” happening in big cities all across America are largely “peaceful.”

We all know that is a bunch of bunk, and while the protesters may lay low and put on a happy face during the day, at night it is a whole different story.

Anyone claiming that the intent of the protesters is peaceful should have his or her head examined immediately as they are clearly delusional and incapable of rational thought.

So here in one brutally illustrated cartoon is the one cognitive test every politician in America should be forced to take, and if they fail they should be immediately disqualified from running for public office: 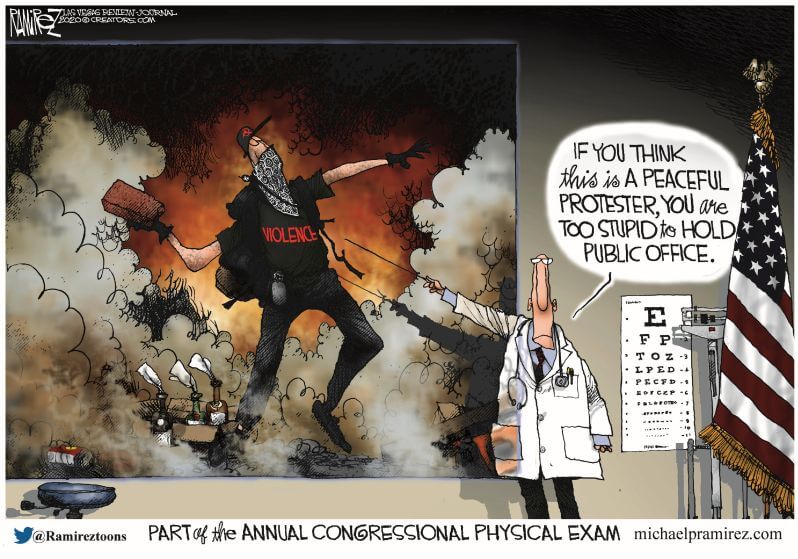 What do you think, do you agree that every politician in America, Republican and Democrat alike, should be forced to take this simple test?

It seems simple enough and if a person cannot pass it, they are clearly delusional and incapable of making good decisions.

In fact, here is more proof that the BLM / Antifa agenda is anything but peaceful:

Black Lives Matter Leader Declares War Against The Police, Calls For A ‘Military Arm’ Of Group

A Black Lives Matter leader has declared a war on police in the United States and has said that they have a “special forces” for it.

Hawk Newsome, the Greater New York chapter of Black Lives Matter chairman, said that his group is “mobilizing” and wants to create a highly-trained “military” arm to take on police brutality, The Daily Mail reported.

“It’s our obligation, it is our duty to provide people with a pathway forward,” he said in the interview with The Mail.

“’We want liberation. We want the power to determine our own destiny. We want freedom from an oppressive government, and we want the immediate end of government sanctioned murder by the police.

“And we prepare to stop these government sanctioned murders by any means necessary.

“We are preparing and training our people to defend our communities,” he said.

He was in Los Angeles at the time of the interview in June as he met with other top brass and “military leaders.”

The meeting was held in the office of actor and comedian Nick Cannon, a Black Lives Matter supporter who has caused controversy recently by calling white people “savages.”

In a conference room at the trendy compound in Burbank, Newsome said the group hammered out details of the ‘Black Opts’ blueprint – which stands for Black Opportunities – a new direction he hopes will be the beginning of the liberation of black people.

Black Lives Matter has tens of thousands of activists protesting the death of George Floyd in dozens of cities around America and across the world.

And BLM’s Greater New York chapter has emerged at the forefront of the movement as black rights become a topic for debate.

Newsome, 43, an imposing 6ft 6in, who wore shades and smoked a thick cigar for our photo shoot, believes his group can lead the ‘war on police’.

“We have black Special Forces officers advising us, and we will teach and train people in our communities, the Black Ops department of Black Opportunities,” Newsome said.

“What we’ll see is people put in place to defend our communities from police who will murder us and get away with it,” he said.

The brazen declaration of war against the police is not likely to do anything to help what the Black Lives Matter organization says it is fighting for.

Sadly, this type of escalation only leads to more death and destruction of people, most of whom want peace.