They say that a picture can be worth a hundred or a thousand words and the A.F. Branco cartoon below is a perfect example of that.

The Democrats are going nuts pushing gun control, claiming there is a white supremacist with an automatic weapon hiding behind every corner.

Democrats and the media know that’s totally untrue so what’s behind there latest gun control push? Money, and lots of it. 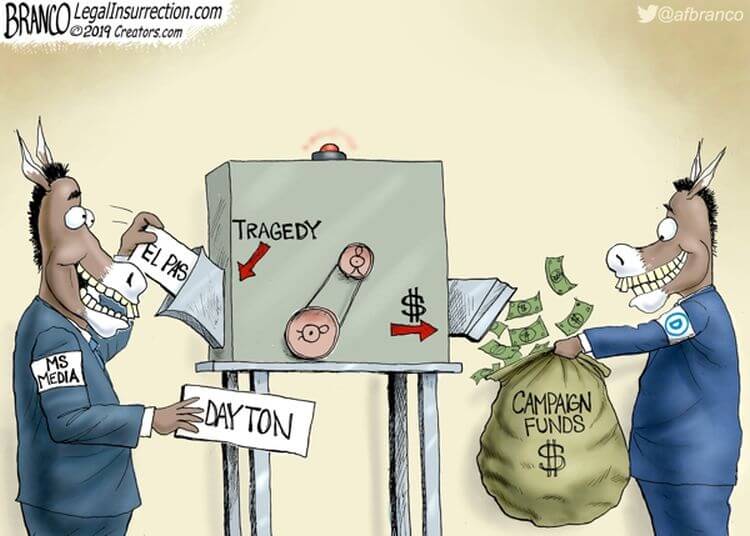 All Democrats REALLY care about is raising campaign cash off of tragedy. They know gun control has no hope of passing, so it’s all about the Benjamin’s.

Speaking of gun control, here’s the truth about mass shootings in America:

Everything You’ve Heard About Mass Shootings is Wrong, Here Are the Facts

The Democrats and the media would have you believe that the country is in the middle of an epidemic of mass shootings led by white supremacists.

Democrats and the media would also have you believe that the only possible way to stop this epidemic is to immediately suspend the Second Amendment and confiscate all semi-automatic weapons.

Nothing could be further from the truth.

While the three mass shootings that have occurred over the past several weeks are indeed horrific and tragic, they do not represent an “epidemic” of mass shootings.

In fact mass shootings that affect innocent and random people are exceedingly rare in our nation of almost four hundred million people.

Consider these facts about mass shootings via American Greatness:

Fact: There were 387 deaths from mass shootings in the United States in 2018 (defined as four or more shot—not necessarily killed—at one time). Of those, most were regular criminals as we expect to see in gang-related drive-bys, bar fights, and a strangely large number of shootings at parties (like this one). About 100 deaths were the result of the random, psycho-killer shootings that dominated news coverage for days and weeks at a time. Mercifully, those are quite rare. But that’s not the impression we are given by the news coverage.

Fact: There are more privately owned guns in the United States than ever before and the number of murders has been declining for decades and has been at or near a multigenerational low for several years. More guns, less crime.

Fact: There were 660 murders in Chicago in 2017. That’s nearly twice the number from mass shootings in the whole country and six or seven times the number murdered by random psychos mass-shooters. Chicago has some of the strictest gun control in the country. Maybe it’s not the guns.

Fact: There are between 1.2 million and 1.5 million defensive uses of guns per year in the United States. How many more murders, rapes, thefts, and assaults would there be without armed citizens?

Fact: There were more than 70,000 opioid deaths last year. That’s 4.5 times the total number of murders and 700 times the number of people killed by psycho mass-shooters. Yet, liberals want to enact far-reaching gun control laws and prevent Americans from defending themselves.

One hundred random deaths of innocent bystanders by mass shooters is by any measure a horrific loss of life, and devastation to countless families.

Yet in a country of 400 million people, it is hardly a crisis that requires millions of innocent gun owners, who have never committed any crime, to lose their rights.

Democrats famously refuse to let any crisis go to waste, but calmer heads must prevail during a time of high emotion.

If any additional laws are needed to prevent mass shootings are needed they should be carefully deliberated in a slow and methodical process using facts, not hyperbole and emotional appeals.

That said I personally cannot imagine any law that would deter a criminal bent on causing harm. The only thing that can stop a person like that is a good guy with a gun.