There is a growing concern about what red flag laws are and how they could be abused on the rights of every American gun owner.

At the heart of the debate is the need for public safety versus the right of law-abiding citizens to exercise their God given right of self-protection.

In the case of a red flag law a concerned citizen could report someone to the police as a danger and then their guns would be confiscated pending a hearing.

In some proposals the person reporting the gun owner would have to be a family member or someone close to the gun owner.

But even with that as a “protection,” it raises concerns. How many times have you argued with a family member and they wanted revenge?

There are numerous cases of child protective services being used as a weapon against a family member who was in an argument with another.

In this cartoon the artist shows exactly what it is that many law-abiding Americans fear could come from these types of laws. 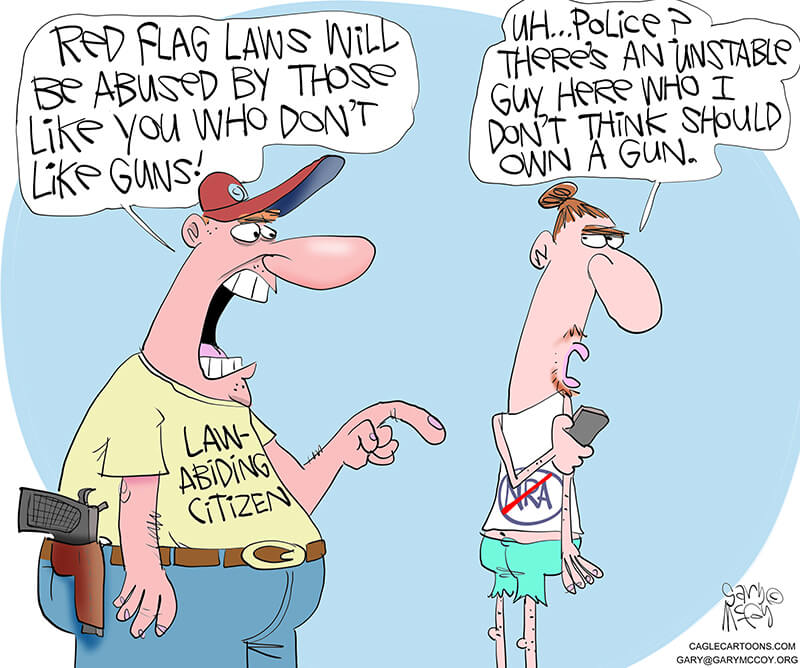 In 2018 there was a case of one of these laws resulting in the death of a man who did not want to surrender his firearms.

Man Killed When Police Come To Confiscate His Guns Under New Law.

It is the first, but likely not the last, death connected to a new Maryland law that allows police to confiscate guns from private citizens.

This is what conservatives have been warning about for decades as Democrats have increased calls for stricter “gun control” which, to many Democrats, translates to a ban on every firearm.

On Oct. 1 Maryland began enforcing a “red flag” law that allows virtually anyone to report a gun owner as a danger to himself or others.

If granted, an order is issued that allows police to confiscate the person’s firearms.

What do you think is going to happen if you start knocking on the doors of Americans?

What is going to happen is precisely what happened when two Maryland police officers arrived at the home of a man and attempted to take his guns.

A deadly confrontation that left the gun owner dead, The Baltimore Sun reported.

Two Anne Arundel County police officers serving one of Maryland’s new “red flag” protective orders to remove guns from a house killed a Ferndale man after he refused to give up his gun and a struggle ensued early Monday morning, police said.

The subject of the protective order, Gary J. Willis, 60, answered his door in the 100 block of Linwood Ave. at 5:17 a.m. with a gun in his hand, Anne Arundel County police said. He initially put the gun down next to the door, but “became irate” when officers began to serve him with the order, opened the door and picked up the gun again, police said.

“A fight ensued over the gun,” said Sgt. Jacklyn Davis, a police spokeswoman.

One of the officers struggled to take the gun from Willis, and during the struggle the gun fired but did not strike anyone, police said. At that point, the other officer fatally shot Willis, police said.

Neither officer was injured, police said, and neither of their names was released.

The “red flag” protective orders are officially known as emergency risk protection orders, and may be sought by family members, police or others to temporarily prohibit people’s access to firearms when they show signs that they are a danger to themselves or others. The law took effect Oct. 1.

A spokeswoman for the Maryland Judiciary denied a request to see any and all requests for protection orders made at the residence on Linwood Avenue, citing the law, which states that anything related to an order is confidential unless the court rules otherwise.

Police had come to the house Sunday night to speak with Willis, a longtime resident of the neighborhood, said Michele Willis, who was on the scene Monday morning and identified herself as his niece. She attributed that visit by police to “family being family” but declined to elaborate.

She said one of her aunts requested the protective order to temporarily remove Willis’ guns.

Michele Willis said she had grown up in the house and had been there Sunday night to move out her son, who had been helping to care for her grandmother.

Her uncle, Gary Willis, lived in an apartment above the garage; she said other family members, including her grandmother, another uncle, two aunts and Gary Willis’ girlfriend were also at the home Sunday night.

She said her uncle “likes to speak his mind,” but she described him as harmless.

Going to a door with a gun in your hand to greet police is not a wise move.

Grabbing the gun and firing it when dealing with the police is deadly.

We are not blaming the police, but the law that sent them to this man’s home is likely to get more people killed.