By now most of us know that the Democratic Party has gone off the rails and would no longer even be recognizable to someone like John F. Kennedy.

Back in those days members of both parties felt it was important to defend the Constitution, our freedoms and our country.

That is no longer true today.

Today’s Democrats support open borders, suppression of our god given and Constitutional rights, and they no longer love our country.

They’ve even rejected MLK’s dream that no man should be judged by the color of their skin in favor of race based politics that demands each person be judged first by their skin color.

Here in one cartoon is how today’s Democrat’s and 2020 candidates have totally destroyed the once pro-America party of JFK: 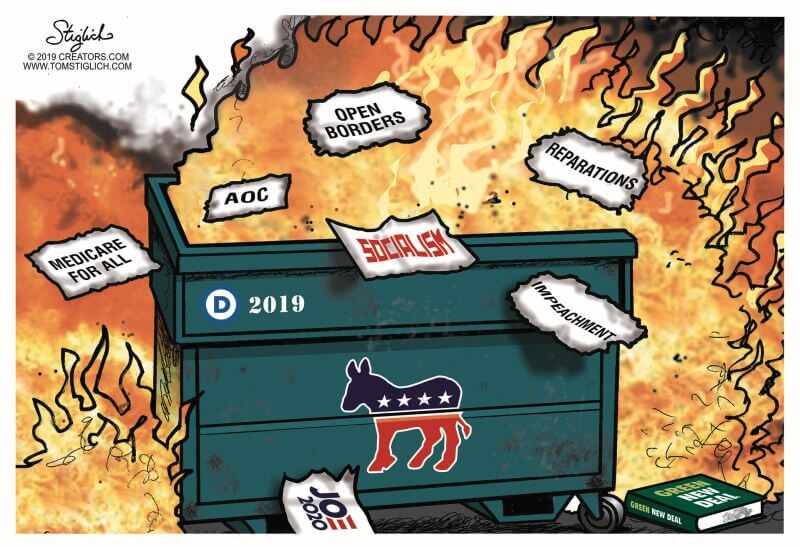 Today’s Democrats have made a dumpster fire out of their party and will soon pay the price at the polls.

President Donald Trump could be the first Republican to win the state of Minnesota in decades and it could clinch his 2020 victory.

CNN had a reporter visit the state, which the president came close to winning in 2016, and they were stunned with what they heard.

“Many voters we talked to here say they align more and more with the president,” CNN reporter Martin Savidge said.

One of those voters is Eveleth, Minnesota Mayor Robert Vlaisavljevich who said that he voted for Democrats in local elections but is a fan of President Trump.

“He’s our guy, he supports mining. He’s our guy,” the mayor of the mining town said to CNN during the network’s visit.

His office has a dear head with a Make America Great Again hat on and a banner that says “Trump 2020” and a Christmas card from President Trump.

The mayor said that one person the residents of his town are not major fans of is the state’s controversial representative, Rep. Ilhan Omar.

“She offends a lot of people here,” he said of the representative who is a member of The Squad that includes New York Rep. Alexandria Ocasio-Cortez.

“Conservative candidates seem to be more for the working person,” resident Melissa Axelson, the wife of a miner, said.

“The Democrats kind of shifted more to the left,” Mike Volker, a resident of the town, said in an interview with CNN.

“And Republicans are sort of taking over [as] the party for jobs,” he said, as his town has been in need of new jobs.

“I don’t think this is by any means the lockdown Democratic state that it used to be,” University of Minnesota, Duluth Associate Professor of Political Science Cindy Rugeley said.

“To continue to give you an idea of the kind of political tectonic shift that’s occurred in the 8th congressional district, which covers the Iron Range here, Saviddge said.

“This was the same district that in 2008 helped to propel Barack Obama into the White House,” he said of the town.

If President Trump wins Minnesota, which has not voted for a Republican since President Richard Nixon, it could mean victory for him.