Democrats and the media act as if the Black Lives Matter movement is all about making Black lives matter and keeping people safe from an out of control police establishment but nothing could be further from the truth.

Crime is surging in America’s big cities and we believe it is caused by the anti-police sentiment and zero bail policies being pushed by the Democrats and the media.

Those being most hurt are the law abiding people who live in lower income neighborhoods. The very people the Black Lives Matter movement is supposed to care about.

They say a picture can be worth a thousand words so here in one cartoon is the truth about BLM the Democrats and media are trying to hide: 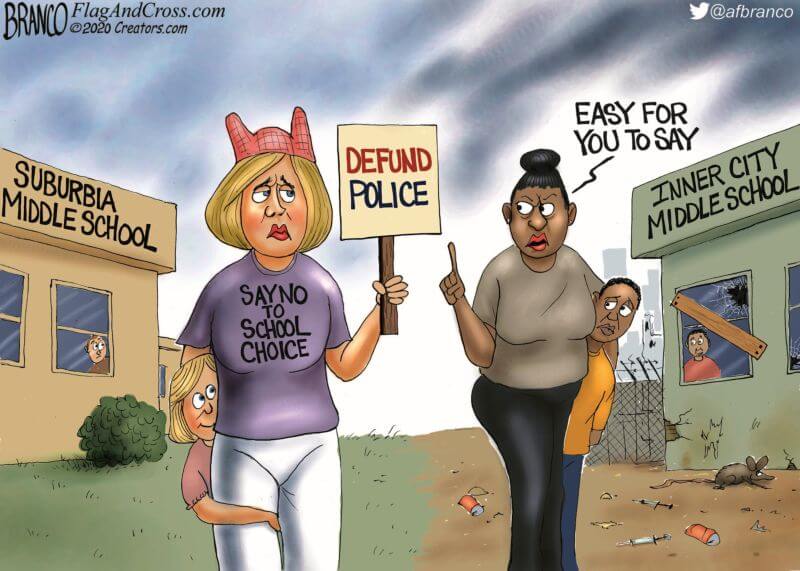 Here is evidence to support the idea that the goals of the anti-police and Marxist BLM movement are not actually popular among the majority of black people via Newsweek:

A majority of Black Americans have said they want police presence in their area to either remain the same or increase, despite recent protests over police brutality, according to new polls.

A Gallup poll conducted from June 23 to July 6 surveying more than 36,000 U.S. adults found that 61 percent of Black Americans said they’d like police to spend the same amount of time in their community, while 20 percent answered they’d like to see more police, totaling 81 percent. Just 19 percent of those polled said they wanted police to spend less time in their area.

Black Americans’ responses to the question were nearly on par with the national average, in which 67 percent of all U.S. adults said they wanted police presence to remain the same and 19 percent said they wanted it to increase.

The poll’s results come amid continuing nationwide protests over police brutality and systemic racism. The rise of the Black Lives Matter movement, which activists founded in 2013, has led the U.S. to its largest collective push for civil rights since the 1960s.

Given the recent uptick in crime it’s no wonder a majority of black Americans want either the same or an increase in the police presence in their communities.

It’s also no wonder that black Americans response was on par with the national average because of course black people want the same thing everyone else does.

Everyone wants security and prosperity and neither one of those outcomes is possible if criminals rule the streets.

Also, to be fair, if there is anyone that should be villainized and held responsible for the increase in crime and lawlessness in American big cities, it is the Democrats, their media allies and even much of corporate America for either promoting, downplaying or funding the Marxist police hating movement known as Black Lives Matter.