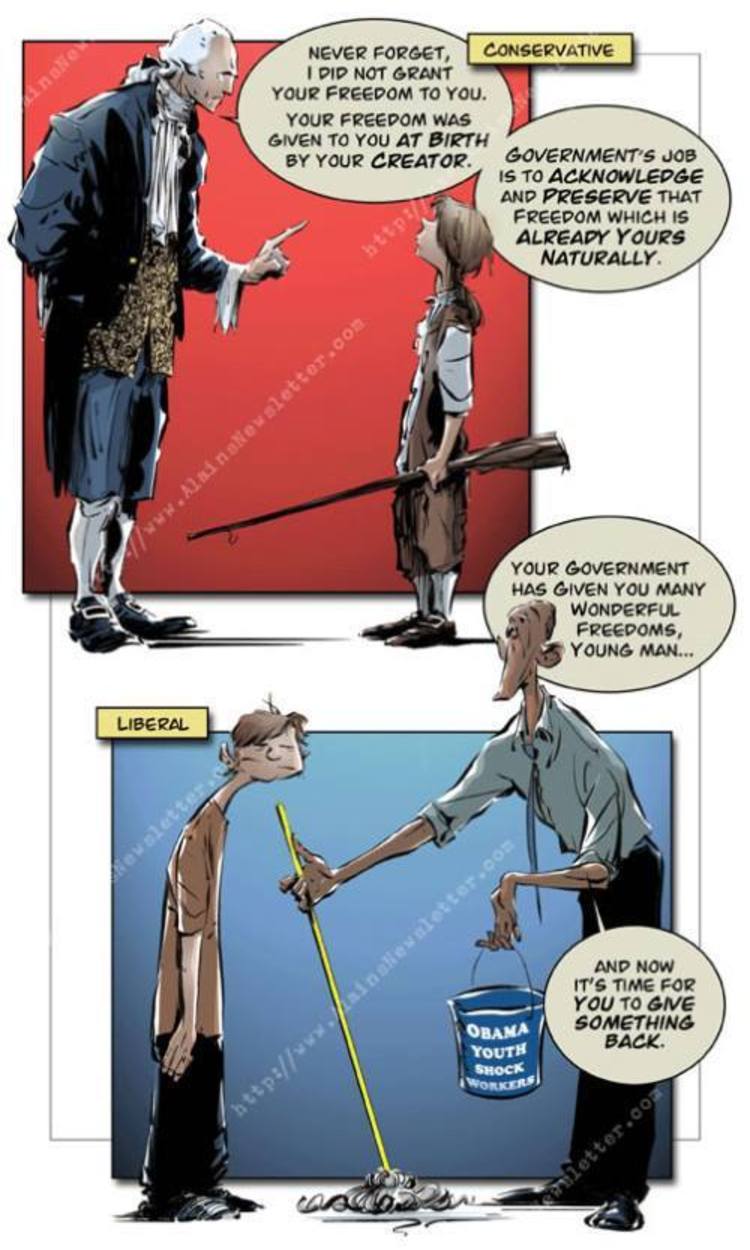 Via John Hawkins at Townhall:

10) Conservatives believe that individual Americans have a right to defend themselves and their families with guns and that right cannot be taken away by any method short of a Constitutional Amendment, which conservatives would oppose. Liberals believe by taking arms away from law abiding citizens, they can prevent criminals, who aren’t going to abide by gun control laws, from using guns in the commission of crimes.

9) Conservatives believe that we should live in a color blind society where every individual is judged on the content of his character and the merits of his actions. On the other hand, liberals believe that it’s ok to discriminate based on race as long as it primarily benefits minority groups.

8) Conservatives are capitalists and believe that entrepreneurs who amass great wealth through their own efforts are good for the country and shouldn’t be punished for being successful. Liberals are socialists who view successful business owners as people who cheated the system somehow or got lucky. That’s why they don’t respect high achievers and see them as little more than piggy banks for their programs.

6) Conservatives believe in confronting and defeating enemies of the United States before they can harm American citizens. Liberals believe in using law enforcement measures to deal with terrorism, which means that they feel we should allow terrorists to train, plan, and actually attempt to kill Americans before we try to arrest them — as if you can just send the police around to pick up a terrorist mastermind hiding in Iran or the wilds of Pakistan.

5) Conservatives, but not necessarily Republicans (which is unfortunate), believe it’s vitally important to the future of the country to reduce the size of government, keep taxes low, balance the budget, and get this country out of debt. Liberals, and Democrats for that matter, believe in big government, high taxes, and they have never met a new spending program they didn’t like, whether we will have to go into debt to pay for it or not.

4) Conservatives believe that government, by its very nature, tends to be inefficient, incompetent, wasteful, and power hungry. That’s why we believe that the government that governs least, governs best. Liberals think that the solution to every problem is another government program. Even when those new programs create new problems, often worse than the ones that were being fixed in the first place, the solution is always….you guessed it, another government program.

3) Conservatives are patriotic, believe that America is a great nation, and are primarily interested in looking out for the good of the country. That’s why we believe in “American exceptionalism” and “America first.” Liberals are internationalists who are more concerned about what Europeans think of us and staying in the good graces of the corrupt bureaucrats who control the UN than looking out for the best interests of this nation.

2) Conservatives, most of them anyway, believe in God and think that the Constitution has been twisted by liberal judges to illegitimately try to purge Christianity from the public square. We also believe, most of us anyway, that this country has been successful in large part because it is a good, Christian nation and if our country ever turns away from the Lord, it will cease to prosper. Liberals, most of them anyway, are hostile to Christianity. That’s why, whether you’re talking about a school play at Christmas time, a judge putting the Ten Commandments on the wall of his court, or a store employee saying “Merry Christmas” instead of “Happy Holidays,” liberals are dedicated to driving reminders of Christianity from polite society.