The meme below illustrates the sad evolution of the Democrat party, from JFK to current 2020 candidate Bernie Sanders: 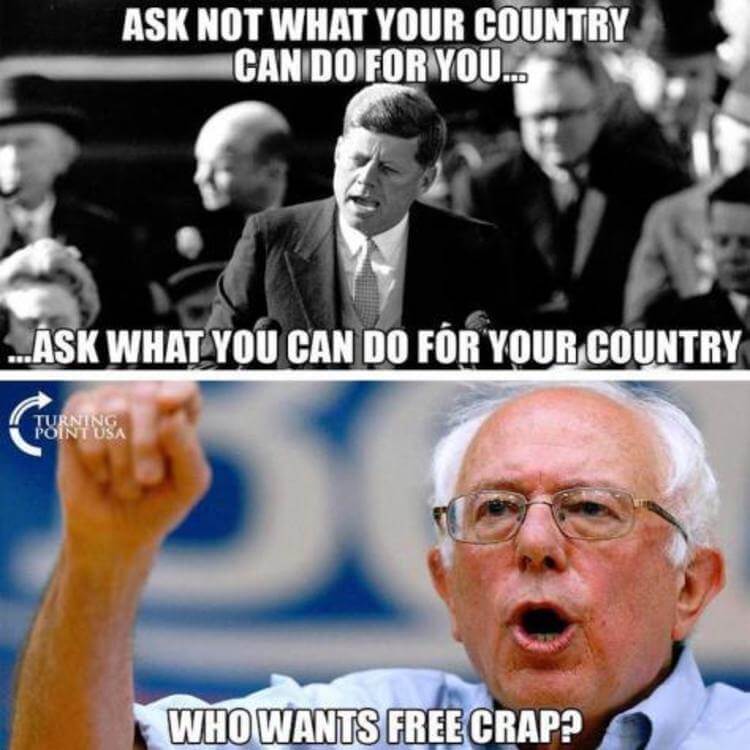 The Democrat Party has gone from asking people to serve their country to promising them free stuff. From fighting communists to embracing communists.

Sad, pathetic and a bit frightening. Let’s hope voters are smart enough to not want to revisit the failed policies of the past.

At a recent CNN town hall 2020 candidate Bernie Sanders tried to explain to the daughter of a Russian emigrant the difference between his Democratic Socialism and Communism, but failed miserably.

CUOMO: “Next question. Samantha is a sophomore at Harvard studying social studies from California. I have a sneaking suspicion that I didn’t say your name it’s not even close to what I said.”

FRENKEL-POPELL: “A lifetime of it. It’s okay. Hi Senator Sanders, so my father’s family left Soviet Russia in 1979 fleeing from the same socialist policies you seem eager to put in this country. How do you rectify it with the failures of socialism in every country that has tried it.”

SANDERS: “Thank you for that question. Is it your assumption that I supported or believed in authoritarian communism that was in the Soviet Union?

I haven’t and I opposed it. I believe in a vigorous policy. You asked me about democratic socialism. Fair question and let me answer I happen to believe that in the United States there is something fundamentally wrong when we have three families owning more wealth than the bottom half of American society. 160 million people.

Something wrong when the top 1% owns more wealth than the bottom 92%. Something very wrong when 49% of all new income today is going to the top 1%. And something is equally wrong when we have a corrupt political system made worse by this disastrous citizen’s united Supreme Court decision that allows billionaires to spend unlimited sums of money to elect candidates that represent the wealthy. So answer number one, it’s a radical idea.

Maybe not everybody agrees but I happen to believe we should have a government that represents working families and not just the 1% and powerful corporations.

That’s point number one. Point number two, what do I mean when I talk about democratic socialism? It’s certainly not the authoritarian communism that existed in the Soviet Union.

This is what it means. It means that we cherish among other things our bill of rights. Franklin Roosevelt made this in 1944 in a state of the union address that never got a lot of attention, this is what he said basically. A very profound speech.

He said we got a great constitution. Bill of rights protects your freedom of religion. Freedom of assembly, freedom of speech but it doesn’t protect and guarantee you economic rights.

So let me be honest with you, I believe in a democratic civilized society health care is a human right. Government should make that happen. I believe that every young person in this country regardless of his or her income has the right to get all the education they need.

That’s why I have fought hard with some success to move toward making public colleges and universities tuition free and very substantially reduce student debt. And I believe there’s something wrong when you have millions of families paying 40 or 50% of their limited incomes to put a roof over their heads and that millions of working class families, young parents cannot find quality and affordable child care.

So we have to address the very, very rich getting richer and middle class struggling and 40 million living in poverty. It means to me that we expand Medicare and provide educational opportunity for all Americans. We rebuild our crumbling infrastructure.

In other words government serves the needs of all people rather than just wealthy campaign contributors. That’s what it means to me.” 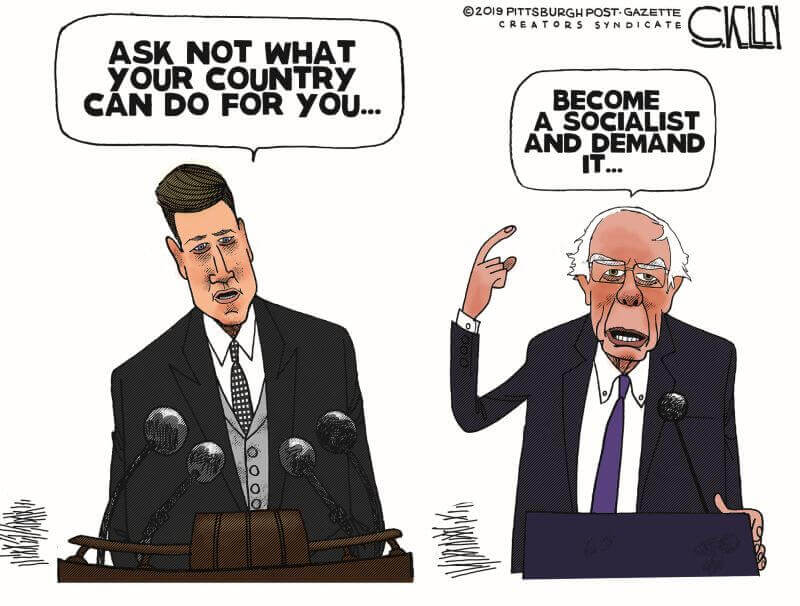