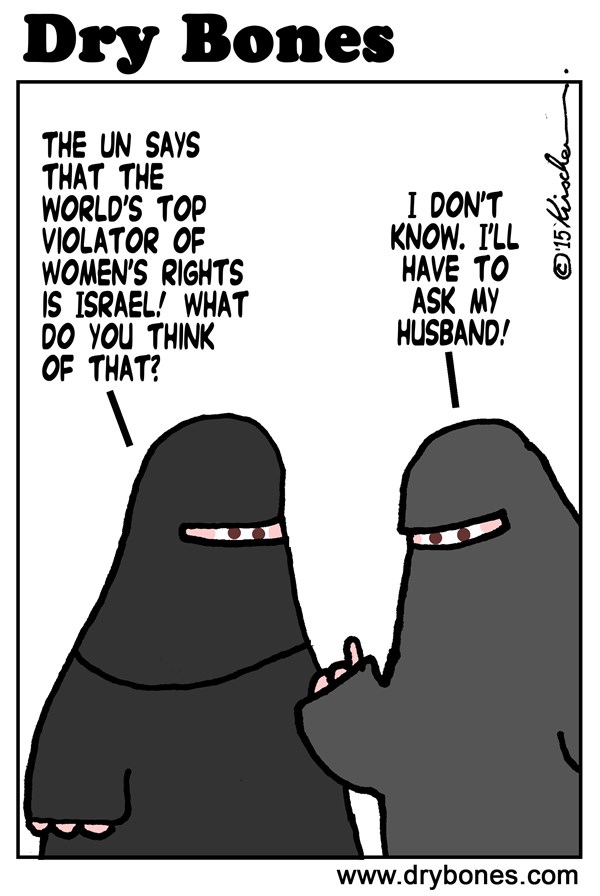 We first reported on the UN declaration condemning Israel as the world’s worst violator of women’s rights here. See also this, this, and this.

When you think of women’s rights violators, what nations do you picture? Pakistan? Nigeria? Afghanistan? North Korea?

The world’s number one violator of women’s rights is in fact Israel, or so says the mentally disturbed body of imbecility known as the United Nations, which on Friday adopted a resolution that singled out Israel for purportedly violating the rights of Palestinian women.

Of the 45 member states that participated in the vote, only the United States and Israel chose to oppose it. Everybody else apparently agreed that Israel’s justified treatment of Palestinian women, many of whom actively plot terrorist attacks on their neighbor, constitutes some sort of moral failing.

It seems extraordinarily discriminatory, especially given that it ignores the beatings, rapes and stonings that occur near daily in nations like Syria, Saudi Arabia, Sudan and Iran, to name a select few.

The resolution also fails to take into consideration the women’s rights violations committed by Hamas, which enforces a litany of strict Islamic codes over Palestinian women, who may not dance, smoke in public, ride behind a man on a motor scooter or even obtain salon treatment from a male hairdresser.

“Instead, the fault for a U.N. statistic like this one – an average of 17% of Palestinian women are in the labor force as compared to 70% of Palestinian men – lies with the Jewish scapegoat,” remarked human rights scholar and activist Anne Bayefesky in a piece for Fox News. …

“If anyone had any doubt that there was demonization of Israel at the United Nations, here is the entire truth before our eyes,” Ron Prosor, Israel’s ambassador to the U.N., told the Jerusalem Post.

“There are 193 member states in the UN, and they include countries that butcher men and women, jail both male and female journalists, execute female oppositionists and legislate laws against women.”

Yet all of these countries receive immunity from the U.N. …

Even worse, our own president looks upon the U.N. as some sort of ally, when it is abundantly clear that the U.N. has slowly but surely become the enemy!