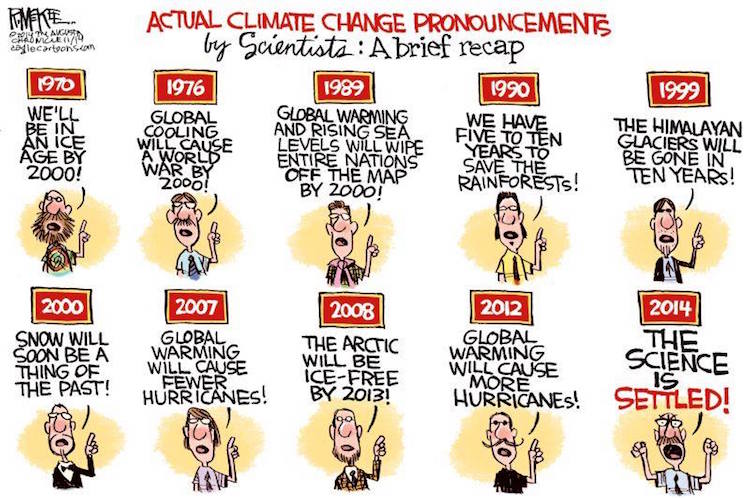 C.E. Dyer writes that if you question the junk science that is global warming President Obama said that you should be fined. According to Obama, anyone that is skeptical about climate change should pay a fine for daring to think for themselves.

In the final days of his presidency, Obama has been setting up what he plans to do with his time and apparently pushing the garbage that is climate change is number two on the community organizer’s schedule — after golfing of course.

Obama spoke about climate change at the White House alongside Hollywood liberal actor, Leonardo DiCaprio, where the president suggested fining people who don’t buy into his agenda, according to The Daily Signal.

“It takes time to ramp up these new energy sources, and we are in a battle against time,” Obama said. “The best way we can spur that kind of innovation is to either create regulation that says, ‘Figure it out and if you don’t figure it out then you’re going to pay a penalty,’ or to create something like a carbon tax which gives an economic incentive for businesses to do this.”

According to the brain trust that is DiCaprio: “The scientific consensus is now in, and the argument is now over.” DiCaprio added, “If you do not believe in climate change, you do not believe in facts or in science or in empirical truths and therefore, in my humble opinion, should not be allowed to hold public office.”

DiCaprio apparently doesn’t believe in the definition of a “theory” either, which differs greatly from “fact” or “empirical truth.” That must never have come up in any of the scripts written by others that he dutifully memorized. His opinion certainly is “humble,” but not in the way he means…

Obama claimed that climate change should appeal to conservatives — particularly sportsmen: “They are generally on the conservative side of the spectrum, but care deeply about this planet that God made,” Obama said.

“It requires us to reach out to sportsmen and hunters and fishermen who may not agree at all on Second Amendment issues but they sure like and understand the notion that they’ve got a forest where they can go out—although they probably don’t want to be mauled by a grizzly bear,” Obama said, in reference to the movie DiCaprio starred in, “The Revenant,” where his character was mauled by a grizzly bear.

The two attended a panel discussion at the event called “South by South Lawn” at the White House where DiCaprio’s documentary film about climate change titled “Before the Flood” premiered.

Obama and the left don’t care about facts or the truth; they care about shoving their radical agenda down our throats.

Since many Americans aren’t that gullible, Obama and his fellow leftists are going to get more and more aggressive. Once Obama is out of office, he’s likely going to go full on community organizer and his pet project is climate change.

As far as DiCaprio and his ilk go, it’s not likely that most of them have similar, sinister, “fundamentally transform” America ideas. Their brains can only hold so much and that generally only includes what someone else tells them is en vogue and being a leftist twit is it.

Liberals just use Hollyturds to promote their agenda to those gullible and sad enough to change their opinion based on what a professional mesmerizer thinks.