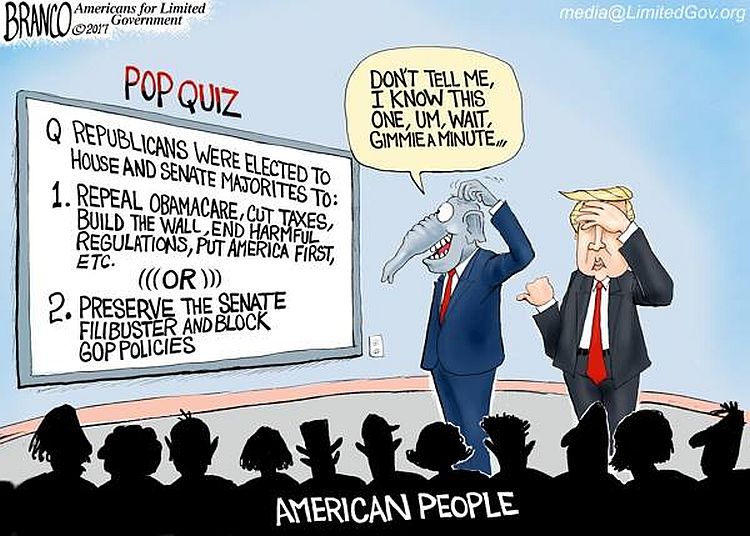 Calvin Freiburger reports that Congressional Republicans’ dereliction of duty just keeps getting more and more surreal. Now Bloomberg reports that Senate Republicans are now considering a plan that would delay the repeal of Obamacare until — are you sitting down? — 2020.

Why? According to Bloomberg:

Republicans — in the early stages of private talks on the Senate plan — say they may first take action to stabilize premium costs in Obamacare’s insurance-purchasing exchanges in 2018 and 2019. Major insurers have said they will leave the individual market in vast regions of states including North Dakota, Iowa and Missouri.

A Senate plan is likely to continue subsidies that help low-income Americans with co-pays and deductibles, said third-ranking Republican John Thune of South Dakota. White House budget director Mick Mulvaney said Thursday the administration hasn’t committed to paying subsidies due in June — which would create additional uncertainty for insurers as they set rates for next year.

“There clearly has to be a short-term solution that works with the transition until some of our long-term policy changes can take effect,” Thune told reporters. “There’s got to be certainty in the marketplace.”

In other words, the GOP is terrified of the media narrative that they’d be taking away people’s subsidies. Never mind that the GOP had the better part of a decade to put together a real repeal plan, and that this attack and every other hysterical smear they’d get thrown at them for doing so was completely predictable. Never mind that the GOP spent years holding symbolic repeal votes under Barack Obama that apparently didn’t mean anything. Never mind that numerous Republicans introduced numerous replacement bills that got broad approval from conservative experts, so deciding on one and going with it should have been totally straightforward.

Never mind that they regained the House, the Senate, and the White House by explicitly promising a full and timely repeal.

At Conservative Review, Chris Pandolfo puts this nonsense in perspective by noting that House Majority Whip Steve Scalise essentially admitted this week that the GOP never intended to deliver the true repeal they promised. Pandolfo explains:

Here’s the problem — these so-called patient protections, mandated by the federal government, are causing the collapse of health insurance markets. These regulations are the reason that health insurance premiums keep increasing year after year. They’re why deductibles are so high. The expense of subsidizing health insurance for people who are already sick is forcing insurers to leave the marketplace.

When people complain about Obamacare’s affordability or its effects on their options, whether they know it or not, they are complaining about the patient protections Scalise says Republicans were never going to repeal.

The fact is, there have already been common-sense proposals to free the American people from Obamacare’s burden without taking anything away from the poor or sick, and they don’t require keeping people enslaved until the end of Donald Trump’s first (only?) term. And more importantly, nothing that’s worth doing on any issue will be immune to the Left’s fear-mongering. So unless they figure out how to confront and defeat it, we might as well hand the government back to the Democrats right now.

Finally, how idiotic would it be to put off fulfilling the GOP’s #1 campaign promise for another three to four years in the name of political expediency? They fear how the media will characterize them in the eyes of people who would never vote Republican anyway, yet are willing to risk going entire election cycles without delivering results for their own base?