By now most readers are aware of the 16 year old climate crusader, who likes to yell at adults, Greta Thunberg.

Greta, and her socialist buddies here in the USA, are pushing what they like to call the “Green New Deal.”

But what would the “Green New Deal” look like to the average citizen, if it was ever implemented?

Here is Greta Thunberg and her “Green New Deal” brutally and hilariously summed up by one cartoon: 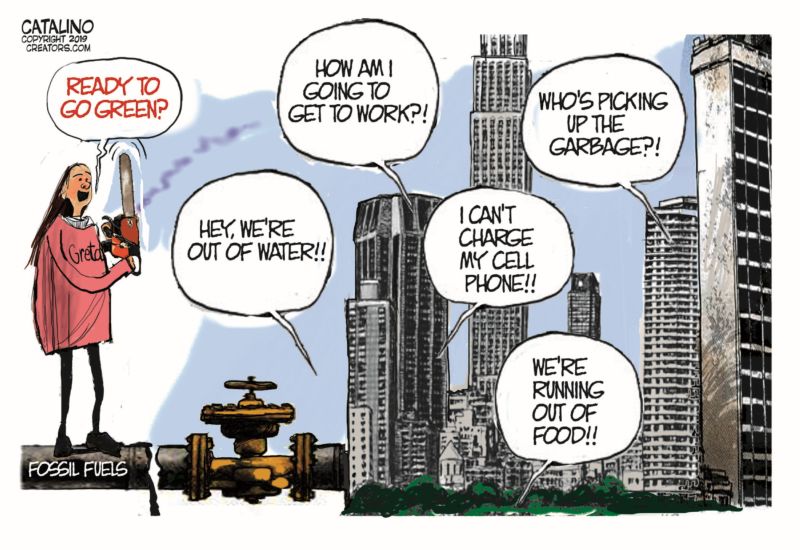 Going green, means going without power, in many cases.

Just ask the folks who like in the socialist republic of California.

The media is on a continued downward spiral that appears to have spiked since the election of President Donald Trump in 2016.

With each day it proves more and more that any credibility that it once had has gone by the wayside in exchange for liberal street cred.

Time Magazine showed that on Wednesday when it named 16-year-old climate activist Greta Thunberg as its Person of the Year for 2019, Reuters reported.

Greta Thunberg, the teen activist from Sweden who has urged immediate action to address a global climate crisis, was named Time Magazine’s Person of the Year for 2019 on Wednesday.

Thunberg, 16, was lauded by Time for starting an environmental campaign in August 2018 which became a global movement, initially skipping school and camping out in front of the Swedish Parliament to demand action.

“In the 16 months since, she has addressed heads of state at the U.N., met with the Pope, sparred with the President of the United States and inspired 4 million people to join the global climate strike on September 20, 2019, in what was the largest climate demonstration in human history,” the magazine said.

“Margaret Atwood compared her to Joan of Arc. After noticing a hundredfold increase in its usage, lexicographers at Collins Dictionary named Thunberg’s pioneering idea, climate strike, the word of the year,” Time said.

Thunberg, who turns 17 in January, continues to beat the drum, saying in Madrid last week that the voices of climate strikers are being heard but politicians are still not taking action.

The activist addressed the latest round of U.N. climate talks in Madrid Wednesday morning, bluntly criticizing world leaders for “negotiating loopholes” and using creating PR to make it appear they are achieving bold climate targets.

But the reluctant celebrity, who has been chased by cameras and attracted large crowds at the Madrid conference, has urged the press to hear from other activists and indigenous youth instead.

“Greta embodies the moral authority of the youth activist movement demanding that we act immediately to solve the climate crisis. She is an inspiration to me and to people across the world,” Gore said.

Other nominees for person of the year included President Donald Trump and House Speaker Nancy Pelosi.

She is the Person of the Year based on what? On the fact that she parrots the climate alarmists doomsday claims?

She appears to be a good kid and someone who wants to make the world a better place. But she is also a frightened kid who has believed everything she has heard.

She has become the number one propaganda tool of the left worldwide and when people like President Trump are changing the world this decision smacks of bias.