Most of readers know by now that President Trump has three Republican challengers in the 2020 primary.

So how do the three stooges on the right compare to President Trump?

The hilarious cartoon below compares President Trump and his three Republican challengers and lets just sat the three come up looking a bit “smaller:” 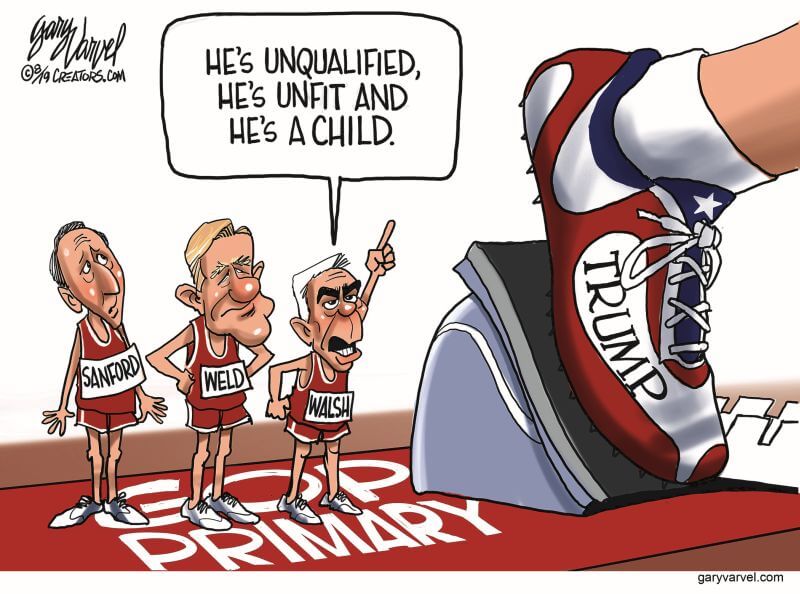 That gets it exactly right, at least in our opinion.

It now looks like former Tea Party favorite, one term Congressman and talk show host Joe Walsh’s anti Trump campaign is set to implode over claims he’s made racist statements in the past.

Because Walsh is a politician he tries to talk his way out of it when confronted but because he’s a quasi-Republican it’s a political death sentence.

Republicans, rightly, can not get away with a thing being under constant and intense media scrutiny, while Democrats can get away with all kinds of racist and improper behavior.

Walsh got hit hard for his racist past, and rightly so. What’s unfair is to tar the President with the same brush and of course the hypocrisy and double standards stink.

Watch as Walsh tries and fails to dance out of his well documented and self admitted racist past.

Walsh is just getting what he deserves. The anti-Trumper remnant is pathetic and if this is the best they can do, entirely laughable.

Why anyone would vote for this joker, or even worse, send him cash is beyond my comprehension.

HEILEMANN: “Congressman, I want to come back to the topic that Nicolle raised a second ago and focus on a little bit more. You know, you’ve apologized for helping to spawn Trump, you apologized for going too far. Look, what Nicolle said a second ago is true for a lot of people, the fact is the President is a stone-cold racist and so are you. And I can sit here and read off tweets, Barack Obama is a Muslim, Barack Obama’s born in Kenya. I got tweets here with you using the n-word not that long ago, and I think for a lot of people the notion that anybody who is exhibited — you can apologize for various things, apologizing for burping at the table or using the wrong fork with your main course is different from offering some kind of a genuine recognition that not just I said things that are offensive but I’m a racist. I said racist stuff. There’s no way someone who has — to many African-Americans looks like as much of a racist as Donald Trump, has the moral standing to challenge Donald Trump.”

WALSH: “Yeah, and I wouldn’t call myself a racist but I would say, John, I’ve said racist things on Twitter, there’s no doubt about it. And an apology is not enough. When I said Barack Obama was a Muslim, that was a horrible thing to say. And I said it because I was so disgusted with Obama’s policy towards Israel, that I went a bad, ugly step. The Sandy Hook moms, I took a cheap shot against them three years ago because they were suing gun manufacturers, an issue that I disagree with. So I took a bad, cheap shot against them. I’ve done that. But, John, again context, I probably sent out 40,000 tweets in the last six years, no excuse, you and I could sit down and find 200 to 300 that you’d say Walsh, what were you thinking? And all I can do is own them and explain them and apologize as sincerely as I can for those that deserve an apology.”

HEILEMANN: “I’ll just add, I think you got a lot of work to do on trying to make a distinction between somehow convincing people, I’m not a racist but I said a lot of racist stuff in public.”

WALSH: “But again, that’s not fair because we have a short show. You said I said the n-word in a tweet. I did. And I did to make a point, because they wanted to change the name of the Washington Redskins so they said Redskins is the new n-word. That’s BS. The Redskins doesn’t equate with the n-word. The n-word has a unique, ugly history in this country. To make that point, I wrote down the n-word in a tweet. To make the point that it’s not nearly what the word Redskins is.”

HEILEMANN: “But you get that in combination with calling the President Muslim, saying that he was born in Kenya, etc., etc., that this paints a little bit of a picture that makes people doubt, again, your moral standing to take on someone whose primary, or at least one of his primary moral failings is his racism.”

WALSH: “John, maybe you and I disagree with this and I never did get into the birther stuff. I said Obama was a Muslim, I’ll get down on my knees, because that was a horrible thing to say. I don’t think Trump is a racist. All Trump cares about is himself. He’ll throw out racist stuff, bigoted stuff. If you help him, that’s all he cares about. I don’t know that Trump’s a racist.”

WALLACE: “You don’t know that — what else do you need to know?”

WALSH: “He’s a racist, he’s a bigot, he’s a xenophobe, he’s everything, Nicolle, because he will use everything to just simply advance his interests.”