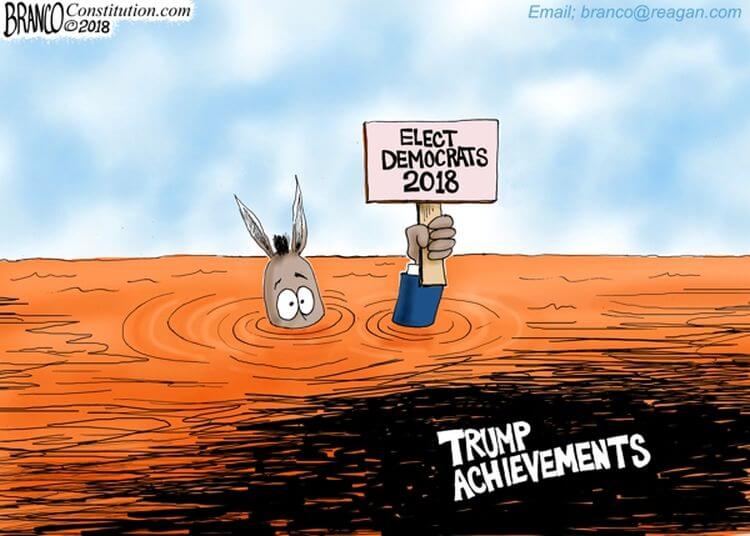 Democrats who think there will be a huge “blue wave” this November may be in for a big surprise:

On Monday, MSNBC host Joe Scarborough warned that Democrats might lose in November, because despite President Trump’s unpopularity among many, the president has achieved many conservative goals.

“The question Democrats should be asking themselves today is whether Trump’s expanding populist checklist will energize the conservative base in November enough to keep his congressional handmaidens in charge,” Scarborough wrote. “Unless Democrats find their voice and an alternative to Trump’s bleak agenda, his pathetic populist shtick might just do the trick this fall.”

Scarborough claims to be a Republican, and he once represented the GOP in Congress, but liberal slant dominated every word of this Washington Post column. Even so, the MSNBC host discovered a very pertinent point: Trump has been delivering on conservative policies far more than the #AntiTrump Republicans anticipated. Not all of the president’s achievements are “populist,” but they will resonate among conservatives in November.

The MSNBC host essentially accused Republicans of selling their souls for Donald Trump. While it seemed at first like they had gained little in return, Scarborough had the vision to admit that the “blundering billionaire has actually begun to fill his political trophy case with victories sure to inspire the conservative base.”

Republican candidates justifying their support for Trump can point to many concrete achievements. “For starters, they can point to Trump’s conservative judicial nominees beyond [Supreme Court Justice Neil] Gorsuch as cause for celebration,” Scarborough admitted. The list actually proved quite expansive.

Their “talking points can also include massive tax cuts, a bigger military budget, regulatory reform and the gutting of the Environmental Protection Agency,” the MSNBC host noted. “Other wedge-issue winners include the planned withdrawal from the Paris climate accords, scrapping of the Iran nuclear deal, undermining Obamacare, moving the U.S. Embassy in Israel to Jerusalem, attacking federal employee unions and promoting extreme immigration policies. Add to that the mocking of political correctness and identity politics, and you have a platform sure to inspire the activists who drive today’s Republican Party.”

In fact the outlook for Democrats is only getting worse with each passing day, even in California:

California Lieutenant Governor Gavin Newsom is worried that Democrats may be taking the so-called “big blue wave” in November for granted.
In fact, the California gubernatorial frontrunner reportedly said on Tuesday that he does not see any evidence of a monster November blue wave, even in the bluest of blue states.

When reporters asked him about the potential for a “big blue wave” in November, Newsom, according to Politico, replied: “I don’t see evidence of that. … In California, we kind of feel like we’ve got this. It’s a big blue state and in some respects, I think we kind of take things for granted at times.”

Will control of one or both houses of Congress flip this November?