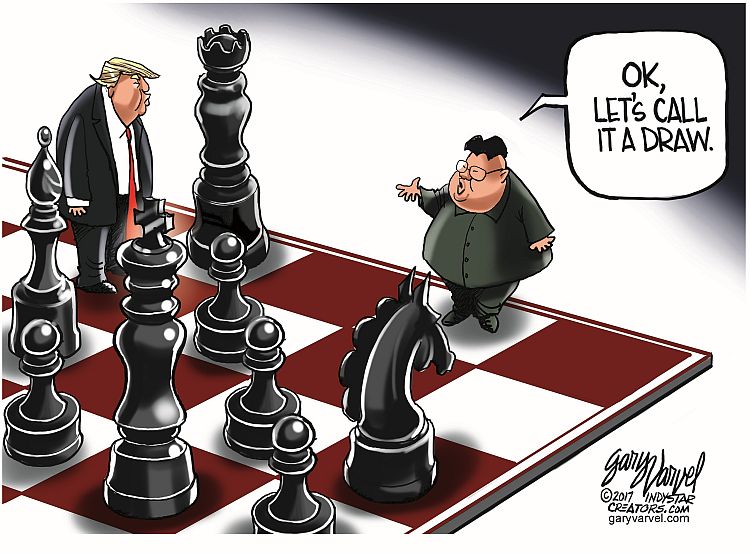 The past several months have been rather tense, as it has been unknown if the regime will actually continue testing ICBM’s to fire towards us here in the States. However, it looks like the regime is beginning to crack.

The Daily Caller reports that Kim Jong-Un has decided not to fire missiles at the U.S. territory of Guam after making threats against the island. State-run media reports that Kim reserves the right to change his mind if “the Yankees persist in their extremely dangerous reckless actions.”

This appears to be a deescalation attempt from the autocrat, after spending much of his time poking and prodding the beast that has enough nuclear weapons to glass his entire country within a few minutes. Over the past several weeks, both sides hurled threats at the other, leading some to conclude that nuclear war could be imminent.

In a translation of the state media report, Steve Herman of Voice of America provided an account of the dictator’s decision to back down.

He said that the U.S. imperialists caught the noose around their necks due to their reckless military confrontation racket, adding that he would watch a little more the foolish and stupid conduct of the Yankees spending a hard time of every minute of their miserable lot.

He said that he wants to advise the U.S., which is driving the situation on the Korean peninsula into the touch-and-go situation, running helter-skelter, to take into full account gains and losses with clear head whether the prevailing situation is more unfavorable for any party.

In order to defuse the tensions and prevent the dangerous military conflict on the Korean peninsula, it is necessary for the U.S. to make a proper option first and show it through action, as it committed provocations after introducing huge nuclear strategic equipment into the vicinity of the peninsula, he said, adding that the U.S. should stop at once arrogant provocations against the DPRK and unilateral demands and not provoke it any longer.

For the time being, Kim has lowered his sword, but he may raise it again unless the U.S. does not change its approach to the regime; as in the U.S. apparently needs to stop poking and prodding the totalitarian state into war.

This step may be an indication that Kim is open to diplomatic solutions, which President Trump has been pursuing vigorously, as opposed to a costly and likely near-genocidal military option.