The BLM movement is far more about removing President Trump from office and installing their anti-American pro-marxist world-view on the country than it is about saving or helping black lives.

If black lives really mattered the primary focus would be on stopping black men from murdering other black men.

A black man in America is far more likely to be shot and killed by a fellow black than by a white police officer.

They say a picture can be worth more than a thousand words so here is the hypocrisy of the BLM movement brutally summed up by a single cartoon: 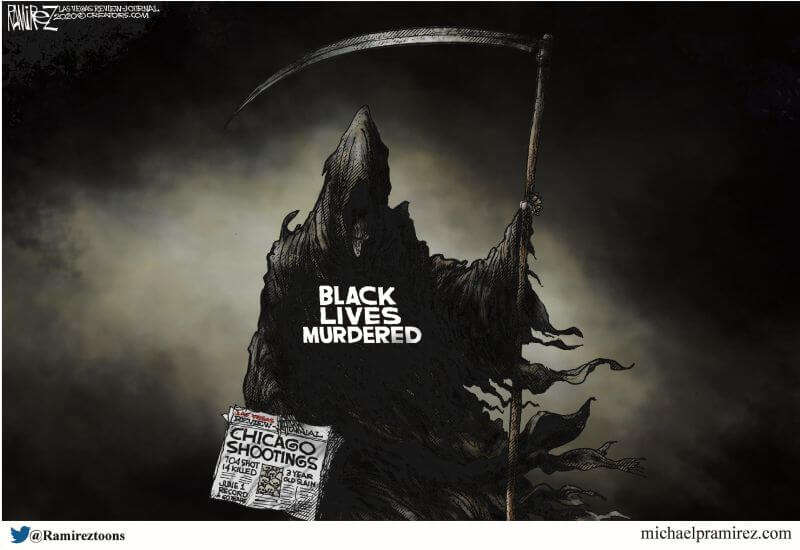 If black lives really matter then black people need to stop killing each other.

Sad, but totally accurate and true.

BLM Co-Founder Admits Their Goal Is Just To ‘Get Trump Out,’ Alienates Black Trump Supporters

The group Black Lives Matter was never quite just an official organization, it also wasn’t just a hashtag. This means that while it currently has one foot in mainstream acceptance, another foot remains in its roots as an organization on the far-ish reaches of the left.

If you wanted evidence of this residual hard-leftist slant, you need have looked no further than Patrisse Cullors’ appearance on CNN on Friday.

Cullors was one of the founders of the movement back in 2013 and has remained one of its most prominent voices, which means she’s in demand again. On Friday, she appeared on CNN to discuss the movement and what its goals were. You may not be surprised at one of them:

During the interview on “The Lead,” Jake Tapper and his perma-scrunched face asked Cullors just what is it she wanted to do — at least when it came to the election.

“The election, obviously, will be a choice. How do you think Biden matches up compared to President Trump when it comes to these issues that are important to you?”

President “Trump not only needs to not be in office in November but he should resign now,” says co-founder of the Black Lives Matter Global Network Patrisse Cullors. “Trump needs to be out of office. He is not fit for office.” pic.twitter.com/T6mLZ11cEv

“Trump not only needs to not be in office in November, but he should resign now,” Cullors said.

“Trump needs to be out of office. He is not fit for office. And so what we are going to push for is a move to get Trump out. While we’re also going to continue to push and pressure Vice President Joe Biden around his policies and relationship to policing and criminalization. That’s going to be important. But our goal is to get Trump out.”

In other words, at a basic level, this isn’t really about black lives — at least not for Cullors.