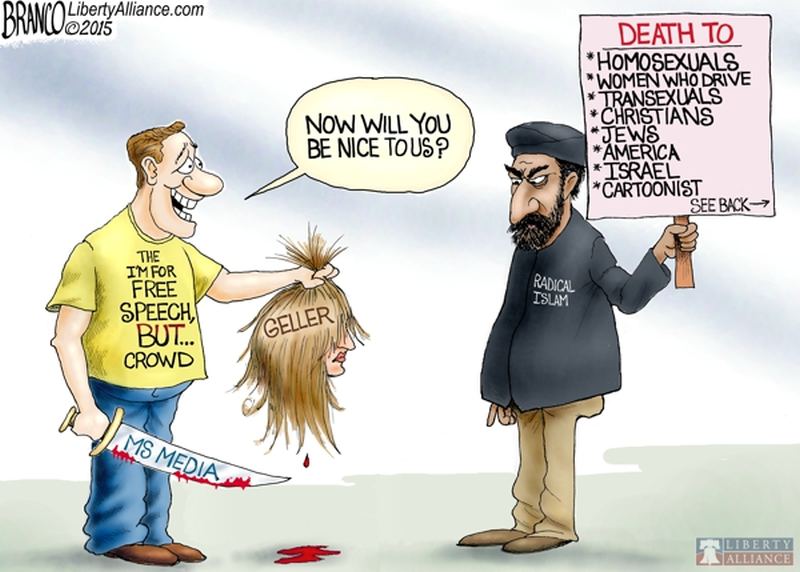 Pam Geller is being attacked by the “I’m for free speech , but…” crowd, and the mainstream media as though she’s worse than ISIS, again, blaming the victim to fit their narrative.

The Associated Press appears to be siding against free speech with its latest tweet attacking free speech advocate Pamela Geller by knocking her as unapologetic that two terrorists were killed during her weekend event.

To flog its latest story on Geller, the AP’s tweet pointedly notes that Geller has “no regrets” over the death of the two Islamists.

The article the tweet links to is no better with its title: “Activist: No Regrets About Cartoon Contest Ended by Gunfire.”

Note that the AP seems to be more worried about the deaths of the terrorists than in free speech, here. All the negative focus is on Geller somehow being uncaring that the Islamists were killed.

“Does Pamela Geller regret organizing the Prophet Muhammad cartoon contest that ended in gunfire?” the AP tsk tsks in its very first sentence.

It doesn’t appear to have occurred to the AP that the two would-be killers wouldn’t be dead if they didn’t go to the event with guns blazing in the first place.

A better question might be whether terrorists regret attacking free speech, or throwing gays off buildings, or hanging them by the neck from cranes, or “honor killing” women and girls, or a host of other Islamist outrages?