We all know that Nancy Pelosi and her crew of bottom dwelling scum-sucking Democrats are pieces of garbage that hate our country and need to be swept out of power this November.

While President Trump and his team is hard at work trying to win the war against the invisible enemy Pelosi and her crew got busy setting up another investigation of the president.

Here’s the difference between Nancy Pelosi and President Trump on dealing with the coronavirus crisis brutally summed up in one cartoon: 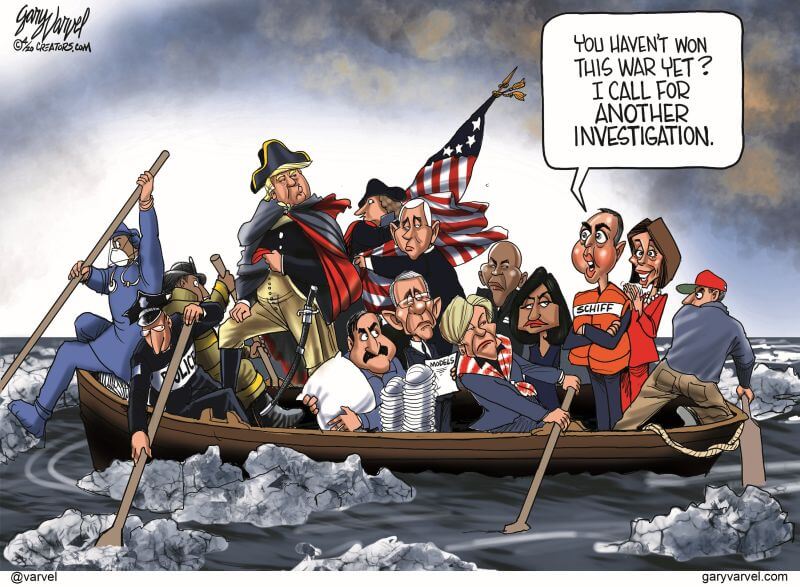 Democrats and their media allies are truly the enemy of the American people.

Watch as House minority leader Andy McCarthy rips Nancy Pelosi a new one for starting a new oversight committee in the middle of a pandemic, while the President is getting the job done for the American people:

Read the transcript, every American needs to know about this nonsense in the middle of a crisis:

DOOCY: “House Speaker Nancy Pelosi launching an oversight committee with subpoena power to oversee the Trump Administration’s response to COVID-19. Here with reaction is House minority leader Kevin Mccarthy, he joins us from Capitol Hill. Leader, isn’t that what Congress is supposed to do? Aren’t they supposed to provide oversight to the administration?”

McCARTHY: “Yes. And we are all providing that. Think for one moment. You have the oversight committee, that that’s all they focus upon.

But in the last bill that we just passed, the CARES Act, we created three new oversight entities, right?

We’ve created the pandemic oversight that is a set-up of inspector generals, Glen Fine is running that.

We created a special individual who will be appointed by the President, confirmed by the Senate, and then we actually created a congressional oversight that is appointed by all the leaders from Schumer to McConnell to Pelosi and myself.

But what’s most telling here is who she appointed. She didn’t go with the Oversight Committee chair, her own. She appointed Clyburn.

Remember what Clyburn said, her majority whip. He said this is the time to restructure, into their vision, government.

Really, what the Speaker should be focused on, what we need to deliver to the American public, let’s take care of the crisis at hand right now.

We have five different oversights already looking at this, and this is what she comes up with?

We need to implement the trillions of dollars that we just said that we passed.

Let’s get it to small business. Let’s get people continuing to work. Let’s make sure we get that $140 billion out to the hospitals who actually need it, our modern day soldiers in the medical community.”

DOOCY: “Yeah. You know, it sounds like there are a number of Democrats, including Speaker Pelosi who is already talking about phase 4. We have just barely gotten phase 3 started right now. But when you listen to some of her — some of her agenda items regarding phase 4, it does sound like it’s a lot of what the Democrats proposed in January. The only difference is now they have added some money for hospitals and community clinics. Right?”

McCARTHY: “What she is proposing is the things she was denied in the last bill, things that had nothing to do with coronavirus.

The Green New Deal, changing election law, bailing out states on pensions that were spent incorrectly, providing more money to sanctuary cities, everything that doesn’t deal with the coronavirus, Planned Parenthood.

These are the things that why she held this bill up for more than four days. I mean, this would already be implemented today, we would be talking about how we are getting the money out, had she not held the bill up earlier.”

DOOCY: “You know, since phase 3 is now underway and it sounds like some people are going to wind up getting checks as early as next week. As a former small business owner yourself, you know, I think you started a business when you are about 20 years old, how important is it for people who are finding these times so challenging with their small business that they get on the website and start the process of getting the money that is out there for them today?”

McCARTHY: “This is the most important thing to do. This bill does a number of things.

What it does with small business is important. If you are a sole proprietor. A small business where I was when I was 20 years old. Government has shut you down to most of those small businesses so you have no income. We want to provide you liquidity.

It’s only a two page form that you have to fill out. It’s out there.

Go to my Twitter page, I will have it up there. GOP leader to be able to send it to you. What do is pay your employee and pay your rent and pay your utilities, that’s no longer a loan.

A portion of that is a grant. We want to keep people working. We want to supply you the resource.

If you are a larger business we will secure a loan and give you retention tax credit to pay for half of your employees.

Individuals will get a check directly to them if they are making $99,000 or less and hospitals get resources that’s what the cares act did. That’s what we should be focused on making sure we are implementing instead of looking at some other bill or some other oversight we just instatued three new oversight committees to oversee this.”

DOOCY: “Speaking of oversight spokesman said this bipartisan committee’s work will help save lives and taxpayer dollars in realtime not after it’s too late to make a difference and that’s something everyone should welcome. Your response to that?”

McCARTHY: “That’s just not true. Halls she not learned from the impeachment and maybe that’s what she is thinking about here. You cannot create a new select committee without Congress voting. I’m here because I’m meeting with the president today. But nobody is here in Washington.

When will we come back and vote on this? It would be too late.

That’s why in the cares act we implemented three new oversight entities within there that she has an appointment.

To say but we already have the oversight committee only to focus on this and we also have every single committee has an oversight subcommittee.

It seems to me this is just politics as usual instead of focused on the crisis that we need to be today delivering for the American public. Making sure we are getting the resources to them.”