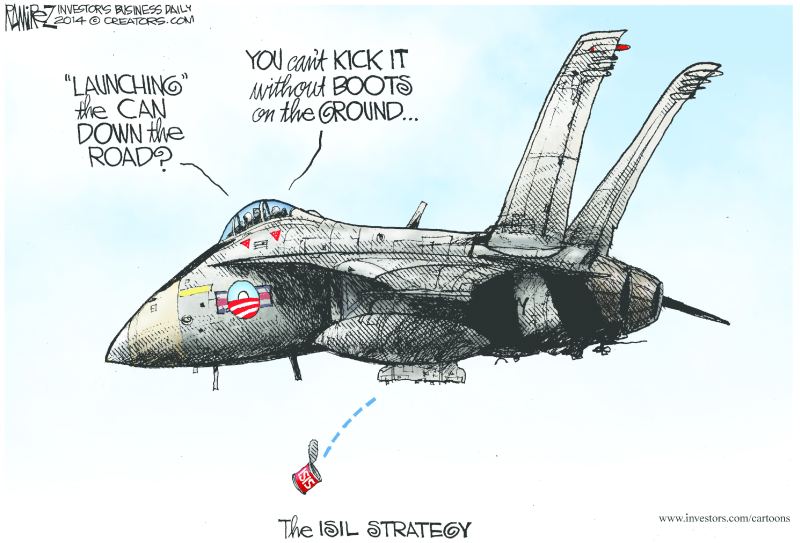 Everything this administration does is based on politics, not leadership.

We can celebrate the fact that the United States is apparently going to bomb ISIS vigorously and not sporadically, and is going to bomb in Syria, aiming at ISIS, and is also going to assist moderate factions in the Syrian civil war.

This last development is unconscionably late, as there was a time when the moderates were a much better bet than they are now, squeezed between the Assad regime and the militant Islamists. There is no possible explanation that is not discreditable for why we went from then-Secretary of State Hillary Clinton’s assertion that Assad was “a reformer,” to the unctuous Obama revelation that it was “time for him to go,” to the infamous, self-eradicating “red line,” to the abdication in favor of Congress to approve the much-announced punitive cruise-missile attacks that new Secretary of State John Kerry assured would be “unbelievably small,” to confiding the disposal of the poison gas that Assad had conferred upon some of his refractory countrymen to the capable and infinitely trustworthy hands of Vladimir Putin, who had supplied Assad in the first place.

This dismal sequence was summarized last Wednesday by the president in his address to the country as the combination of strength and diplomacy that resolved the Syrian poison-gas crisis. It would also have been easier to deal with ISIS from the air when they were running amok with their assault vehicles festooned with black flags. And we were admonished to remember that the “Islamic State ” is not Islamic.​ …

No one can blame a political leader for putting the best possible face on his actions, but such wild fantasies as these incite concern over whether the president is really in touch with the facts, or whether he is chronically untruthful.

This alarm was escalated when, in the midst of his address, President Obama told his viewers and listeners: “This is American leadership at its best.” There are two serious problems with this. It isn’t American leadership at all, and certainly not at its best; and it is tasteless, déclassé, and unprecedented for a president of the United States, in an address to the nation to outline policy in a national-security crisis, to critique at all, and especially in such unearned superlatives, his own performance.

It is not conceivable that Roosevelt in the “great arsenal of democracy” address (December 1940), Truman in advocating aid to Greece and Turkey (1947), Eisenhower in sending the U.S. armed forces into Lebanon (1958), Kennedy in imposing the blockade of Cuba (1962), Nixon in invoking the “silent majority” in support of “Vietnamization” (1969), or Reagan in announcing the Strategic Defense Initiative (1983) would have offered a personal opinion of the quality of his leadership. Roosevelt said that neither “the pious frauds” of those Americans who served the interests of the dictators, nor any “dictator [or] combination of dictators,” would deter the United States from doing what its clear national interest and moral duty required. Nixon said, “This is my policy and I take responsibility for it.

If it succeeds, what my critics say now won’t matter; if it fails, what I say then won’t matter.” In Truman’s famous phrase, all of them — and all those named were often responsible for American foreign-policy leadership at its best — understood that the buck stopped with them.