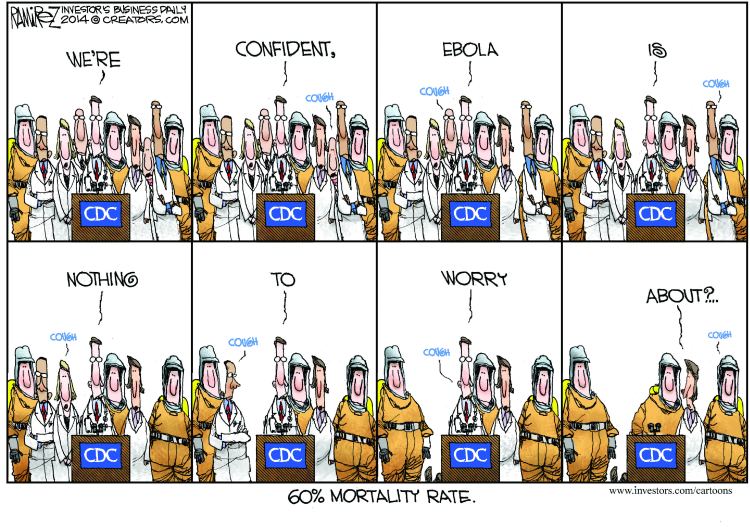 The biggest risk of a global Ebola pandemic comes from government incompetence.

What would a global pandemic look like for a disease that has no cure and that kills more than half of the people that it infects?  Let’s hope that we don’t get to find out, but what we do know is that more than 100 health workers that were on the front lines of fighting this disease have ended up getting it themselves.The top health officials in the entire world are sounding the alarm and the phrase “out of control” is constantly being thrown around by professionals with decades of experience.So should average Americans be concerned about Ebola?  If so, how bad could an Ebola outbreak in the U.S. potentially become?  The following are 25 critical facts about this Ebola outbreak that every American needs to know…

#1 The spread of Ebola is starting to become exponential…

#2  This is already the worst Ebola outbreak in recorded history by far.

#3 The head of the World Health Organization says that this outbreak “is moving faster than our efforts to control it“.

#4 The head of Doctors Without Borders says that this outbreak is “out of control“.

#5 So far, more than 100 health workers that were on the front lines fighting the virus have ended up contracting Ebola themselves.  This is happening despite the fact that they go to extraordinary lengths to keep from getting the disease.

#6 There is no cure for Ebola.

#7 The death rate for this current Ebola outbreak is over 50 percent, and experts say that it can kill “up to 90% of those infected“.

#8 The incubation rate for Ebola ranges from two days to 21 days.  Therefore, someone can be carrying it around for up to three weeks without even knowing it.

#9 For the first time ever, human Ebola patients are being brought to the United States.  And as Paul Craig Roberts so aptly put it the other day, all it would take is “one cough, one sneeze, one drop of saliva, and the virus is loose“.

What do you think about the Ebola outbreak? Are you worried at all?