Everyone knows the media is incredibly biased against President Trump.

The leftist media in fact is so biased they’ve practically become an extension of the Democrat party and it seems their primary focus has become making sure Joe Biden wins the election in November.

The media distorts and twists everything President Trump says or does while giving Joe Biden a pass for his worst behavior and past policy positions.

They say a picture can be worth a thousand words so here in one politically incorrect cartoon is the media double standard over Joe Biden versus President Trump. 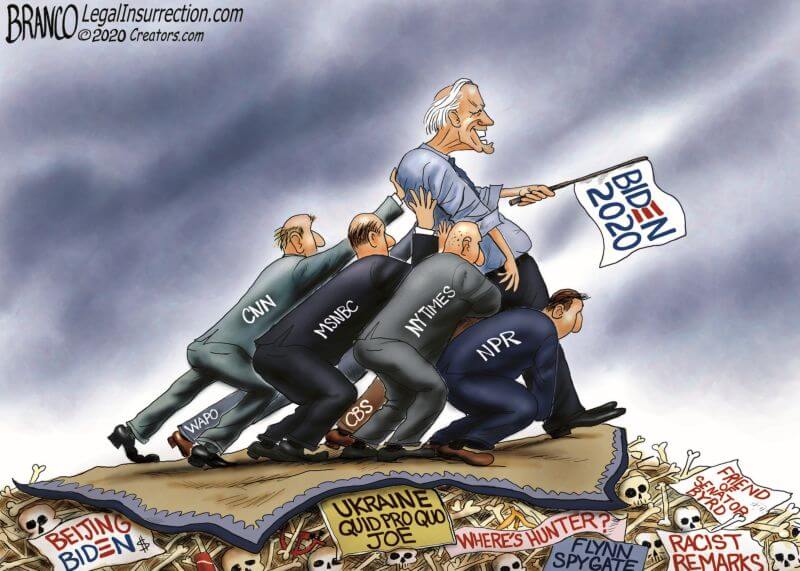 Does that about sum the whole sordid thing up?

As the president has said many time, the mainstream media has truly become the enemy of the American people.

They’ll do anything to help Biden get elected, even if it means covering up his part in the worst political scandal in American history.

I don’t think anyone in this committee is going to suggest that Peter Strzok was some secret Republican operative. The guy despised Donald Trump and his own notes say Joe Biden and Barack Obama personally directed the political persecution and targeting.”

“Anyone who cares about the Department of Justice should be outraged,” Cruz said in part.

Watch the whole thing, via CSPAN:

Ted Cruz is right about all of this.

This is the biggest political scandal in American history. Barack Obama and Joe Biden spied on a opposing political campaign and then mounted a coup against his successor.

CRUZ: “Thank you, Mr. Chairman. I intend to support Senator Lee and Senator Durbin’s bill. I think it is a good bill. I’m co-sponsoring the bill. A number of our Democratic colleagues in this hearing and in previous hearings have gone on at considerable length casting aspersions at Attorney General William Barr.

I want to express, for my opinion, I think that those accusations are entirely ill-founded. In my judgment, Attorney General Barr has done an extraordinary job as attorney general. I’m glad he’s going to be testifying next month.

I look forward to that testimony. I’m sure we’ll see lots of fireworks and lots of presidential politics playing out at that hearing. But I think Bill Barr answered the call to serve as attorney general when he didn’t need to; he already served as attorney general, he already made a whole bunch of money in the private sector, he had a very happy life.

And he got a call that he didn’t want, to return to the job that he did 30 years ago, at a time when Department of Justice was in crisis. And the job he has done is restoring accountability to the Department of Justice. And he did so knowing he would be demonized, knowing he would be pilloried by politicians, by the press. And he stood up for the rule of law regardless.

And I would point out, just yesterday, the Department of Justice released hand-written notes from Peter Strzok. Those notes describe a January 27 meeting with President Obama and Vice President Biden discussing targeting General Flynn.

That’s Comey’s words, as written down by Peter Strzok, both of whom despise Donald Trump and have made no secret of that.

Mind you, within days, the conversations that appear legit would become the basis for a political persecution and targeting. And by the way, in those same Peter Strzok notes, they reflect that Joe Biden suggested, ‘Hey, why don’t we use the Logan Act to go after him?’

The same Joe Biden who said publicly he didn’t know anything about targeting General Flynn.

Well, according to Peter Strzok’s hand-written notes, it was Joe Biden, two months after a presidential election where Donald Trump was elected, it was Joe Biden who said, ‘Let’s use Logan Act,’ an unconstitutional 200-year-old law that the Department of Justice has never once prosecuted and convicted any human being on Earth for.

It was Joe Biden that said, ‘Let’s use the Logan Act to go after him.’ And Obama echoed, ‘Yes, let’s target him. And can we keep this from the incoming transition?’

Those notes are and should be a bombshell. Of course, the nightly news can’t be bothered to cover them. That level of political corruption at the Department of Justice and the FBI is an absolute scandal.

And the reason I think Bill Barr has done an extraordinary job as attorney general is he has had the fortitude to expose it.

And the reason why the whole Democratic world is really upset with him is, how dare you expose the political corruption that undermined the Department of Justice?

I don’t think anyone in this committee is going to suggest that Peter Strzok was some secret Republican operative. The guy despised Donald Trump and his own notes say Joe Biden and Barack Obama personally directed the political persecution and targeting.

Anyone who cares about the Department of Justice should be outraged.

That’s part of why I’m supporting Senator Lee and Senator Durbin’s amendment here. Because we need accountability at the Department of Justice.

And let me be clear, that would be wrong whether it was a Democratic president or a Republican president. The Department of Justice and FBI are not tools in a partisan warfare. They’re meant to follow and apply the law. And that’s why I’ll be voting for this legislation.”