By now many people know that Supreme Court Justice Sonia Sotomayor is upset because there is, in her opinion, a bias at the top court in favor of the Trump administration and conservative causes.

While to us that is a positive, now that liberals are in the minority on the court she of course sees bias as a negative.

Which means she is a hypocrite. Sotomayor is fine and dandy with bias on the court so long as it tilts in the direction of her beliefs.

When it goes the other direction, not as much.

Here in one cartoon is Supreme Court Justice Sonia Sotomayor’s hypocrisy brutally exposed on her complaint that there are too many Trump friendly justices on the court: 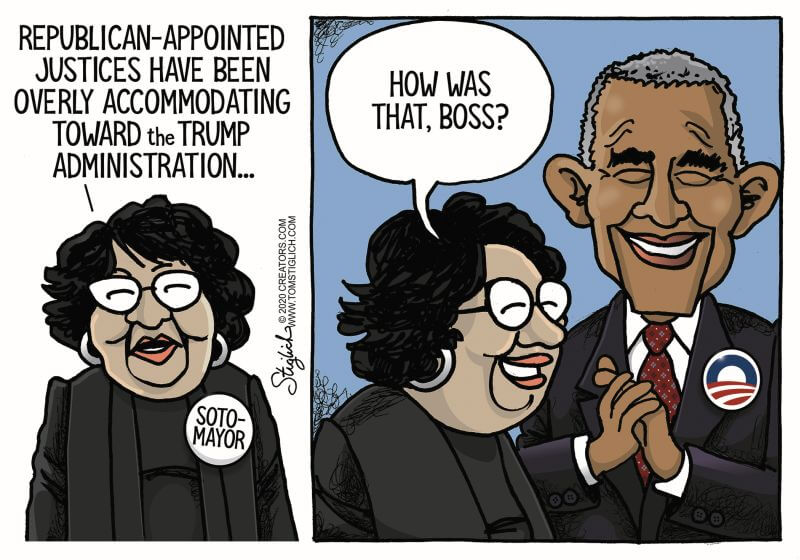 Justice Sotomayor is fine with bias on the court so long as the left is ascendant. When conservatives are the majority, suddenly its a crisis.

Again, in my mind that conservative bias is a positive thing and look forward to more Trump, McConnell appointed federal judges.

What makes me happy is knowing Sotomayor must also be quaking in her boots at the thought of four more years of President Trump and his future Supreme Court picks.

Now that liberal lackeys like Sotomayor no longer have the power, they are shocked, shocked I tell you, that there is bias in the courts! #DemocratPartyStooge https://t.co/B3HZEoAKZU

Here’s the back story on why Justice Sotomayor is so mad:

The Supreme Court in a 5-4 decision along familiar ideological lines lifted the final bar to President Trump’s public charge immigration rule from going into effect.

Via The Washington Free Beacon:

“Justice Sonia Sotomayor handed down a ferocious dissent Friday after the Supreme Court lifted the final barrier to a Trump administration rule that withholds green cards from immigrants dependent on government services.

At issue in Friday’s case was the so-called public charge rule. Federal immigration law provides that immigrants should not receive permanent legal status if they are likely to become “a public charge.” The government has traditionally defined a public charge as a person dependent on a cash assistance program. The Trump administration’s rule expands that definition to include other forms of non-cash assistance like food stamps.

The vote was five to four and tracked familiar ideological lines. The Court did not give an explanation for its decision, as is typical of such orders. In dissent, Sotomayor said the Trump administration has been bringing cases to the Supreme Court prematurely by exploiting procedural rules.

David Rutz breaks down the most important news about the enemies of freedom, here and around the world, in this comprehensive morning newsletter.

“Claiming one emergency after another, the government has recently sought stays in an unprecedented number of cases, demanding immediate attention and consuming limited Court resources in each,” Sotomayor wrote. “And with each successive application, of course, its cries of urgency ring increasingly hollow.”

“It is hard to say what is more troubling: that the government would seek this extraordinary relief seemingly as a matter of course, or that the Court would grant it,” she wrote.”

This was an excellent decision by the Supreme Court and shows once again that elections have consequences.

If a Democrat had the opportunity to fill two vacant Supreme Court seats the outcome of this case could have been very different.

It’s another reason why it’s so important that not only Donald Trump be re-elected but that Republicans hold the Senate.

“Judge Sotomayor says ‘eminent’ when she means ‘imminent,’ ‘providence’ instead of ‘province,’ ‘story of knowledge’ instead of ‘store of knowledge,’ and so on” Ed Whelan reminded us years ago. https://t.co/FcatdwvM5n

Steve Straub
Steve has been involved in national politics for over 20 years and helps run one of the largest conservative opinion and analysis sites in the country.
Cruz: ‘Plausible’ that Covid-19 Was Being Studied at Wuhan Institute of Virology and Escaped From the Lab
Remember the Woman Who Died Waiting for a Coronavirus Test in New Orleans? Her Tests Came Back Negative
Watch as Fauci, Birx Give Sobering Coronavirus Assessment: Expect 100,000 to 240,000 Deaths with Mitigation
My Pillow CEO Mike Lindell on Being Attacked By Jim Acosta, Media, ‘Are They Really That Evil?’
Jim Acosta Asks Trump a 'Gotcha' Question, Trump Hits Back Hard, "I Want to Give People Hope"
See more...