Here’s the cartoon that got banned in 2014 because hysterical and easily hurt Democrats were offended: 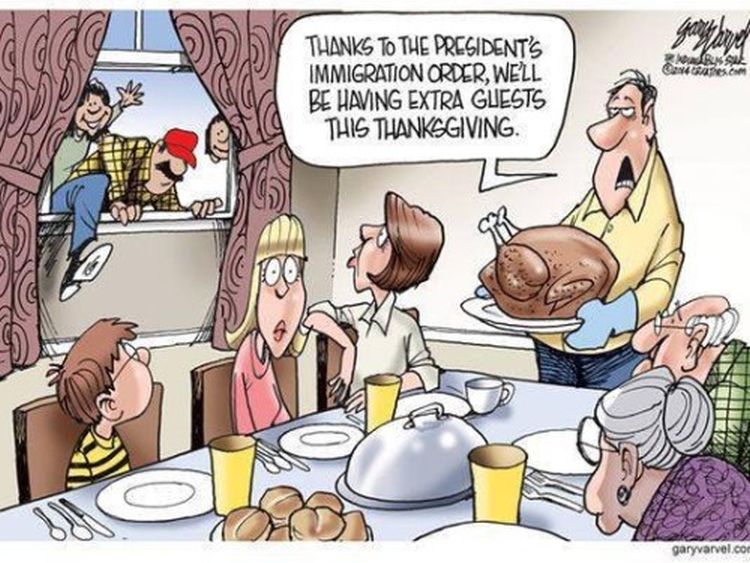 Personally think that cartoon is fine, and in fact it’s 100% accurate.

After publishing the cartoon the lilly livered publisher issued this wimpy and whiny apology:

On Friday, we posted a Gary Varvel cartoon at indystar.com that offended a wide group of readers.

Many of them labeled it as racist. Gary did not intend to be racially insensitive in his attempt to express his strong views about President Barack Obama’s decision to temporarily prevent the deportation of millions of immigrants living and working illegally in the United States.

But we erred in publishing it.

The cartoon depicted an immigrant family climbing through a window of a white family’s home as Thanksgiving dinner was served. I was uncomfortable with the depiction when I saw it after it was posted. We initially decided to leave the cartoon posted to allow readers to comment and because material can never truly be eliminated once it is circulating on the web. But we are removing the cartoon from the opinion section of our website, as well as an earlier version posted on Facebook that showed one character with a mustache.

This action is not a comment on the issue of illegal immigration or a statement about Gary’s right to express his opinions strongly. We encourage and support diverse opinion. But the depictions in this case were inappropriate; his point could have been expressed in other ways.

Cartoons are seldom intended to be read literally. And Gary did not intend this one to be viewed that way. He intended to illustrate the view of many conservatives and others that the president’s order will encourage more people to pour into the country illegally.

The illegal immigration issue evokes strong opinions and emotions. And it’s important to encourage a vigorous public debate on issues of this magnitude, but with respectful discourse. That is what we believe at IndyStar and that is what we will continue to do – to publish views from all sides as we explore the important issues that will define the future of our nation, state and city.

The cartoonist was then forced to change his original cartoon: 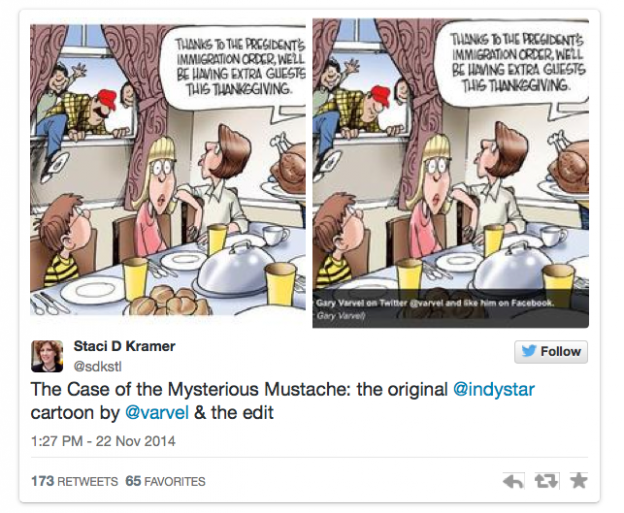 Gary Varvel is purportedly a conservative.

Why he agreed to change his cartoon andgo along with this craven apology is beyond me.

Are people really this wimpy and easily offended?

What’s become of the people of our great nation?