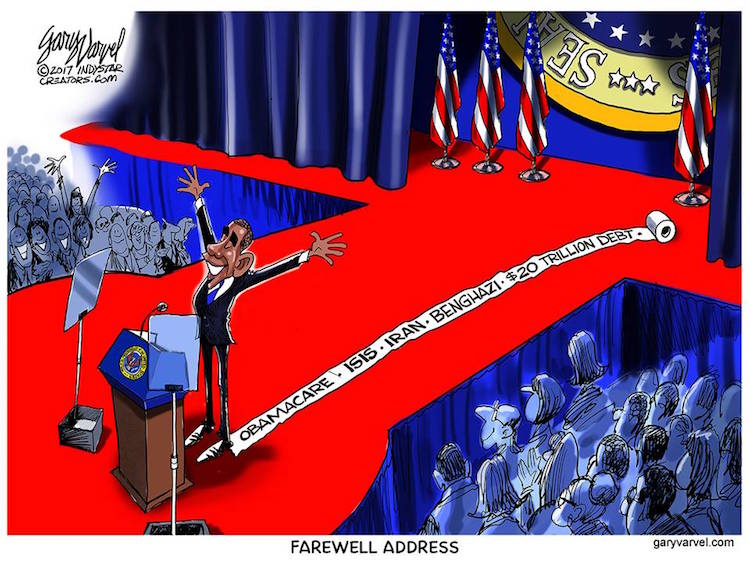 Robert Gehl reports that in his hometown of Chicago, Barack Obama spent Tuesday night crowing about his achievements as the nation’s first community organizer-turned-president.

Like shining a turd, Obama doubled down on his failed “achievements” and touted successes that don’t exist.

This call came speaking from the heart of Obama’s failures: Chicago. A bankrupt city where crime has skyrocketed in recent years. Fiscal mismanagement and a Black Lives Matter “war on cops” mentality that has been nurtured by Obama are primarily responsible.

So it was fitting that he would choose this place to drop the biggest lies of his presidency on our heads.

This is the President’s signature achievement and his mark of its success is how many insured we have now – but at what cost?

It turns out that it’s more expensive covering people who were never covered in the first place than people who now have Obamacare.

Even worse – millions have been shoved onto a program they simply can’t afford. One study showed four in ten adults on Obamacare wonder how they’ll pay for it.

RELATED: One Question Everyone Has After Obama’s Latest Bragging

Obama told us we were safer Tuesday night because of his administration. No foreign terrorist organization has attacked American soil on his watch. This is his biggest lie. There are at least 13 verified attacks that have taken place where foreign terrorists have taken credit:

Obama said his climate change agenda is one of his greatest achievements. But Jack Welch told CNBC that Obama’s focus on climate change has hurt the economy:

A longtime GOP supporter, Welch told CNBC’s “Squawk Box” the priority on preventing climate change spills over into “all kinds of policies throughout the different agencies.”

The result, he said: “You get an economy that won’t move. You get ozone regs that are wacky.”

“You [also] get a reduced military,” he added — saying the U.S. needs to rebuild its national defenses to combat the threat from the so-called Islamic State terrorist group. “You can’t be sitting here with the real threat of a caliphate and ISIL … and talking about climate change.”

Jobs: This is his most-repeated claim – that he has increased the number of jobs since he took office. While it my be factually correct, it ignores some important distinctions: the type of job growth and the rate.

Obama Touts This. Currently at 5 percent, the unemployment rate is at the lowest level since Obama became president. In addition, the president has “created” about 8.1 million net new jobs since 2009 – a little less than the 8.7 million that were lost during financial crisis in 2008 and 2009.

But Not This. Those rosy unemployment numbers fail to factor in millions of people only marginally attached to the workforce, or those who would like to work, but have quit looking for employment out of frustration at the lack of opportunities. When those workers are factored in, the real unemployment rate, otherwise known as the underemployment rate is now 9.9 percent – nearly twice the rate of the “official” metric.