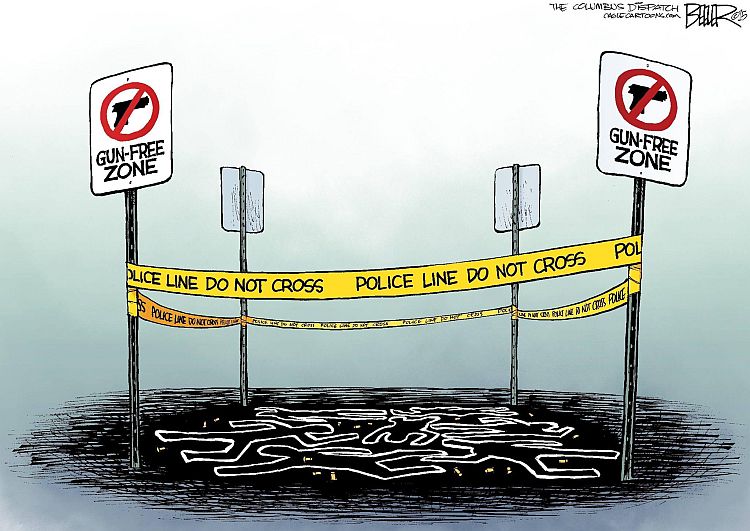 Robert Gehl reports that a new bill working its way through the Missouri Legislature would allow law-abiding gun owners to sue businesses that ban firearms on their property.

Rep.-Elect Nick Schroer, representing O’Fallon – said he filed the bill – and another one making it a “hate crime” to attack a police officer, firefighter or EMT because of their occupation in the name of “deterrence.”

Under House Bill 96, anyone authorized to carry a firearm can sue any business that has a “gun-free zone” if they are injured while they have been involuntarily disarmed.

Essentially, by disarming law-abiding Americans, the company “assume(s) custodial responsibility for the safety and defense of any person” on their property who could carry.

Three months ago, lawmakers overrode Gov. Jay Nixon’s veto and passed laws relaxing restrictions on the use of firearms and the use of deadly force. But under the law, the Springfield News-Leader reports, private property owners could post an 11- by 14-inch sign with one-inch letters declaring their property “off limits” to concealed firearms.

Schroer said he wasn’t aware of any case in his state that the law would have affected. He did point to James Holmes’ rampage through a movie theater in Aurora, Colorado, that left 12 dead.

The theater was officially a “gun-free zone,” that “almost put a target on the back of all the customers there that had to disarm themselves.

Schroer said he met with small businesses when he was campaigning and talked about regulation and would like to meet with the National Federation of Independent Business “to find a happy medium.”

As for pushback to the bill, Schroer was aware that some would be wary of “all these people coming in with their guns” and that some might think “it’s gonna be like the Wild West,” but he remains a believer in the logic that a good guy with a gun can stop a bad guy with a gun.

He says the liability in his bill would make businesses reconsider their actions as it pertains to patron safety, citing as an example businesses that don’t put out “Wet Floor” signs after mopping.

“Hopefully, business owners are going to start looking at these decisions,” Schroer said, adding that he hoped to start a discussion on campus carry and ending gun-free zones.

A similar law was passed in Tennessee this summer, making business owners think twice before they decide to disarm their customers.