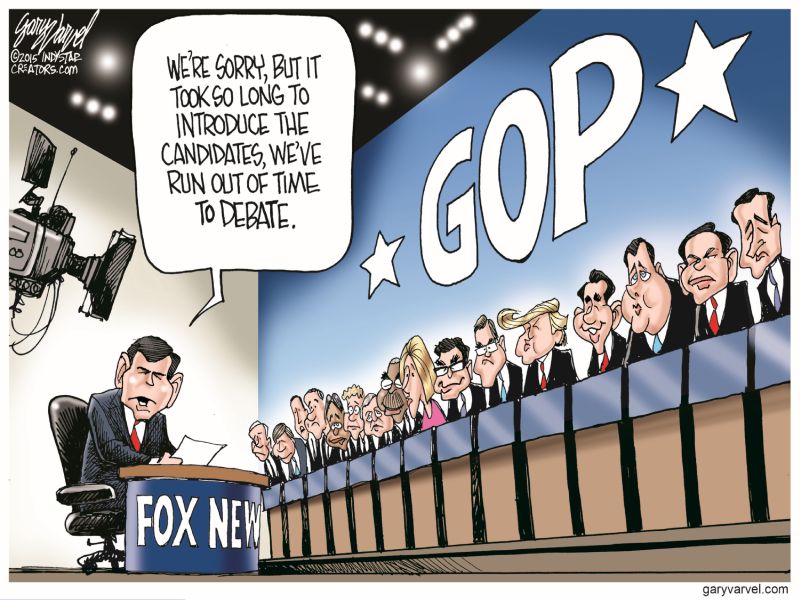 Less than a week before a bushel of 2016 Republican presidential hopefuls square off for the first time in two Fox News debates, billionaire businessman Donald Trump is holding firm to his primary lead — while his lower-polling rivals battle for visibility in hopes of making the cut for the prime-time stage.

Trump, seemingly reveling in his role as instigator and bipartisan punching bag, opened up a 7-point lead over the rest of the field in the most recent national poll. Wisconsin Gov. Scott Walker and former Florida Gov. Jeb Bush also are polling consistently well.

Rather, the 11th-hour dash is among those in the middle and back of the pack, competing for the last of 10 slots in the prime-time event at Cleveland’s Quicken Loans Arena.

The Aug. 6 debate is hosted by Fox News, in conjunction with Facebook and the Ohio Republican Party.

The 9 p.m. ET stage will be open to the top 10 candidates in recent national polls. With 17 total candidates now in the race – former Virginia Gov. Jim Gilmore was the latest, announcing his bid Thursday – not everyone will make the cut.

Those who don’t can qualify for an earlier debate, at 5 p.m. Fox News has eased the criteria for that debate, and candidates will no longer have to reach at least 1 percent in the polls to make the stage, though there are other criteria.

But there is heavy competition for the main event, the first time leading candidates will face off after seemingly weekly campaign kick-offs. …

Will you watch the debate later this week?