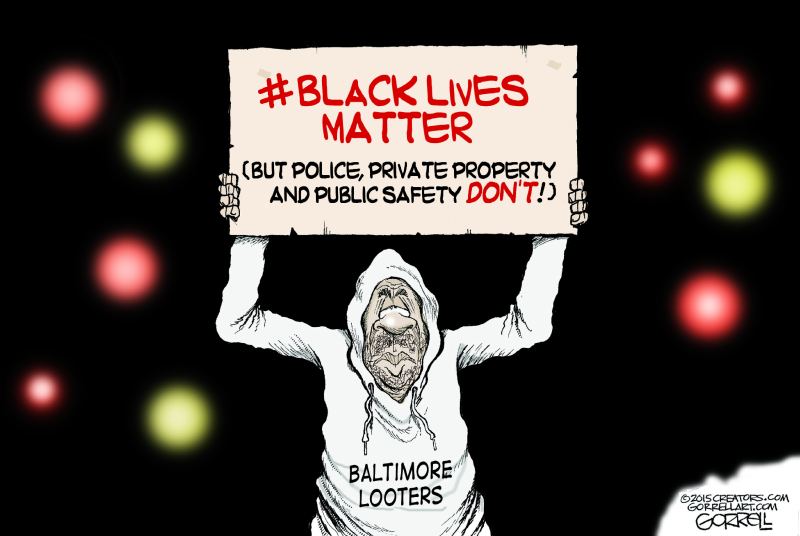 Baltimore has the fifth highest big city murder rate in the country. The four cities ahead of it are Detroit, New Orleans, Newark and St. Louis. All these cities have something in common. Not racism, but race.

The killers and the dead are black.

If black lives really mattered, then black violence would matter. But that would mean taking responsibility for a broken culture which few leaders in the black community are ready to do.

Instead the death of Freddie Gray in police custody became the excuse for another round of #BlackLivesMatter riots, looting and assaults. Rather than dealing with the violence killing black Baltimore, it became another excuse for more of the same.

The media is always ready with the usual lies about peaceful protests being “marred” by sudden outbreaks of violence. Ferguson’s peaceful protests of screaming and throwing things at cops were suddenly marred by days of looting, arson and shootings.

Baltimore’s peaceful protests were marred by smashing cars, smashing windows, throwing rocks and assaulting random people still showing their white faces in the city. The police tried to stay out of it giving the protesters and their supporters what they really wanted; the opportunity to commit crimes without being held accountable.

Crime without accountability is the real cause that the protesters are there for. Their violence isn’t a reaction to anything except the permissive atmosphere created by their false accusations of racism.