Here’s a hilarious bar joke that will have conservatives in stitches and turn liberals, leftists and Democrats (same thing) purple with rage: 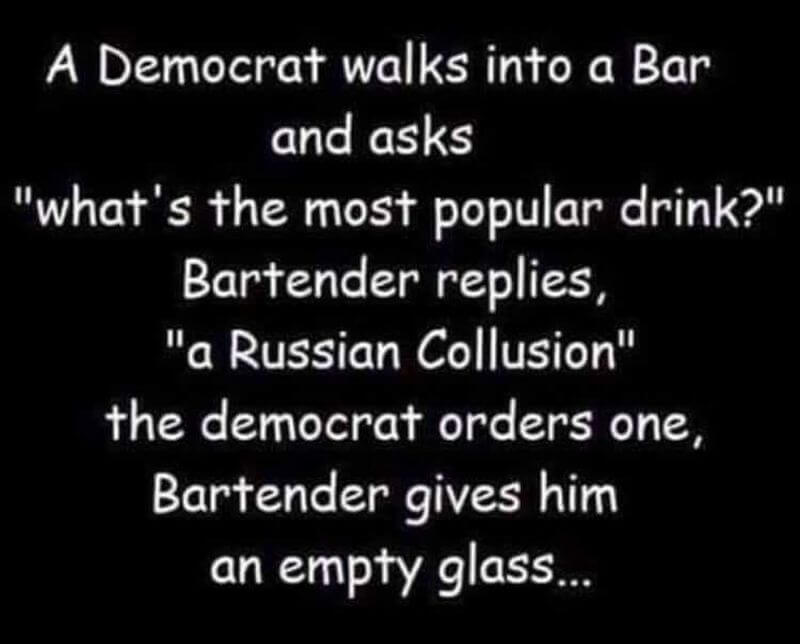 Now THAT is funny, but it also make an excellent point!

That said many Democrats including Nancy Pelosi won’t let go of their ridiculous Russia narrative:

Video Shows Nancy Pelosi is Batsh*t Crazy, Babbles on About Putin and Russia

Watch as Speaker of the House Nancy Pelosi babbles and stumbles while trying to sat that voter should decide our elections, not Russia and Vladimir Putin:

Wow that is literally just insane!

What that video clearly shows is that Speaker of the House Nancy Pelosi is batsh*t crazy, and that President Trump has finally driven her off the edge.

The Democrats have completely lost their grip on reality and need to be sent packing this November.

PELOSI: “On January 13th reports emerged the Russian government hacked a natural gas company Burisma as part of their ongoing effort to influence U.S. elections to support — in support of President Trump.

And yesterday the House Committee, two of our chairman here, Chairman Nadler of Judiciary, Chairman Schiff of Intelligence, Chairman Eliot Engel of Foreign Affairs, and Chairwoman Maloney of Government Reform, they released new evidence pursuant to a House subpoena — Lev Parnas, you know who that is, an associate of Rudy Giuliani, that further proves the president was the essential player in the scheme to pressure Ukraine for his own benefit in the 2020 election.

This is about the Constitution of the United States. And it’s important for the president to know and Putin to know that the American voter — voters in America should decide who our president is, not Vladimir Putin and Russia.”

This woman, and the rest of her crew of bottom dwelling scum-sucking Democrats need to be thrown out on their ears this November.