This hilarious super bowl joke has conservatives laughing out loud and has liberals, democrats and leftists (same thing) turning purple with rage. 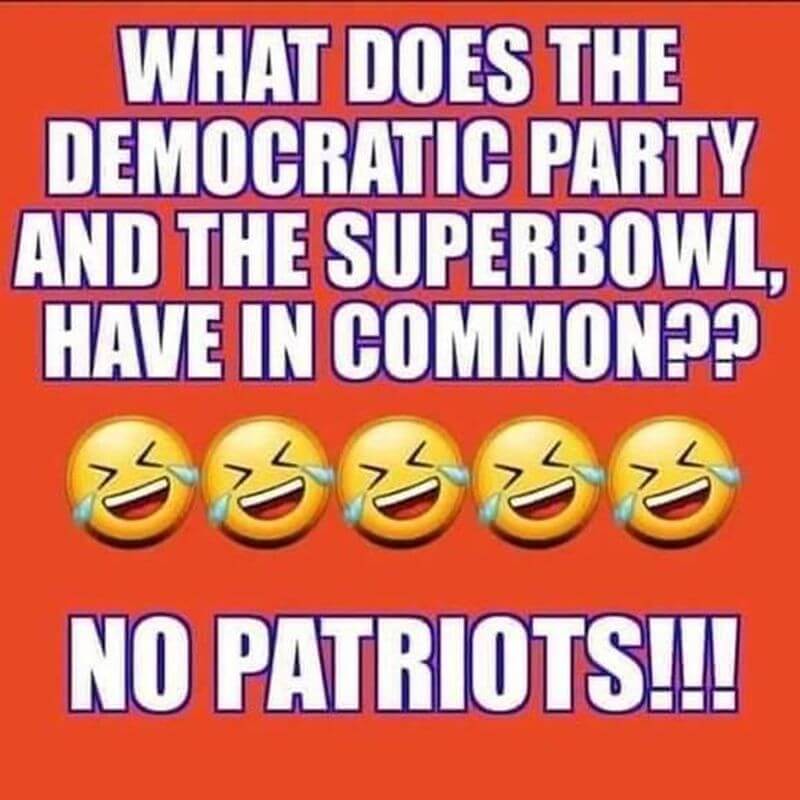 Now THAT is funny, and is sure to piss off some lefties!

If The Democrats Lose in 2020, They’ll Try to Destroy the Country

If the Democrats lose the elections in 2020, I believe they will try and destroy our country.

That may seem like hyperbole, and blowing things way out of proportion, but based on what we’ve seen the past few years, it is almost undeniable.

The Democrats and their media allies not only do not care one whit about the average American citizen, they actually hold us in contempt.

People like Nancy Pelosi, Adam Schiff, Chuck Schumer, Elizabeth Warren and Bernie Sanders and the rest of their motley crew of Democrats hate us because we elected President Trump in 2016.

The political elite, including many, many fake Republicans, chose Hillary Clinton to be the next President but we rebelled.

Ever since then they’ve been doing everything they can to overturn our decision, no matter the cost to the country.

First they tried recounts to overturn the election. When that failed they tried to persuade the electoral college electors to vote against the choice of the people.

When that failed they decided to claim that the President of the United States was secretly a Russian agent under the control of Vladimir Putin.

They also claimed that conservative media, like this site, was fake news and the Russians controlled our operations. Democrats and the media demanded Facebook shut us down. Which they did, for a while.

After two and a half years of the unprecedented Mueller hit job, that too fell apart but many Democrats, like Nancy Pelosi, still refuse to let go of the Russia narrative.

Speaker Nancy Pelosi said on Sunday that the US isn’t doing enough to protect elections and wondered aloud about Mitch McConnell being Trump’s Russia accomplice.

So, they decided instead to seize on what is really Joe Biden’s corruption, Trump asking Ukraine to look into how Hunter Biden ended up making 80K a month from a company in which he had no experience, at the time his dad oversaw Ukraine policy for the Obama administration, to start their impeachment push.

Trump committed the sin of investigating a racket that both sides have profited from for a long time.

Now we are on the cusp of the Senate impeachment trial that Democrats know is certain to end in acquittal for the President. They also know he is likely to win re-election in 2020.

So what do they have in store for us next?

I believe that if they lose in 2020 they will move to try and fundamentally undermine the fabric that holds our nation together and further rip this nation apart.

If Trump wins in 2020 they’ll move to undermine the Supreme Court and the federal court system, claiming it is racist and rigged, and promote the idea of packing the courts to “fix” the problem.

If Trump wins in 2020 they’ll move to create violence in the streets to further try and intimidate those that disagree with them, and to undermine law enforcement.

This is why it is imperative that President Trump wins re-election in 2020. We cannot allow the current Democratic Party to have any access to power, to the degree we can help it.

Democrats like Pelosi and Schumer are a danger to our country and they must be removed from positions of authority at the polls this coming November.

The fate of our country literally depends on it.