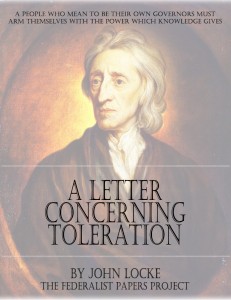 A Letter Concerning Toleration by John Locke was originally published in 1689. Its initial publication was in Latin, though it was immediately translated into other languages. Locke’s work appeared amidst a fear that Catholicism might be taking over England, and responds to the problem of religion and government by proposing religious toleration as the answer.

John Locke’s Letter Concerning Toleration is one of the most under appreciated texts in the liberal tradition of political philosophy. When read in conjunction with his Second Treatise, it clarifies the relationship Locke envisions between individuals and the state. In the letter, Locke argues that all religious practices should be tolerated unless they are a threat to the proper functioning of the state.

To download your copy of “A Letter Concerning Toleration” by John Locke please right mouse click on the link, then select “save as” and download to your computer – John-Locke-A-Letter-Concerning-Toleration