For where is the man that has incontestable evidence of the truth of all that he holds, or of the falsehood of all he condemns; or can say that he has examined to the bottom all his own, or other men’s opinions? The necessity of believing without knowledge, nay often upon very slight grounds, in this fleeting state of action and blindness we are in, should make us more busy and careful to inform ourselves than constrain others.

At least, those who have not thoroughly examined to the bottom all their own tenets, must confess they are unfit to prescribe to others; and are unreasonable in imposing that as truth on other men’s belief, which they themselves have not searched into, nor weighed the arguments of probability, on which they should receive or reject it.

Those who have fairly and truly examined, and are thereby got past doubt in all the doctrines they profess and govern themselves by, would have a juster pretence to require others to follow them: but these are so few in number, and find so little reason to be magisterial in their opinions, that nothing insolent and imperious is to be expected from them: and there is reason to think, that, if men were better instructed themselves, they would be less imposing on others. 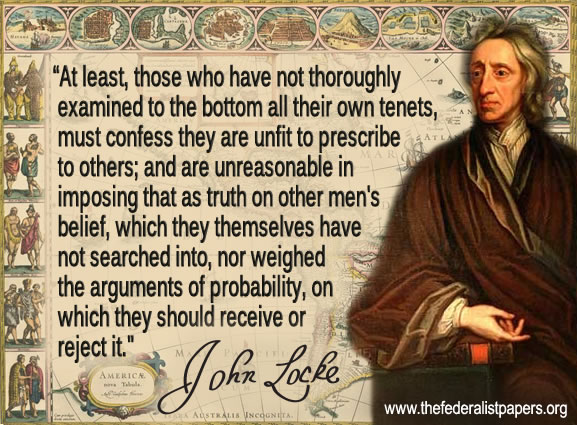 Tina Didreckson
Tina Didreckson, first read the Declaration of Independence, the Constitution, Federalist Papers and Bill of Rights in 1980 before she voted in her first primary. Didreckson is employed as Historian, Researcher and IT person for a local history museum. She is also the coordinator of Horizontal Grandeur, a national fine art exhibition which celebrates life on the the prairies of North America. Having been around PCs since 1981, she is a go-to person for computer questions, an avid Photoshop user, Social Media maven, and webmaster/board member for several non-profits including her granddaughter's 501(c)3 corporation, the Erin Tanner Liver Foundation. Fiercely independent, Didreckson is also a sculptor, potter, mixed media artist and owner of Prairie Fire Studios.
George Washington, Freemen or Slaves
Benjamin Franklin, On Safety and Liberty
James Madison, The Free Men of America
William Blackstone, Private Property and the Law
Abigail Adams, Excellence is Rare
See more...