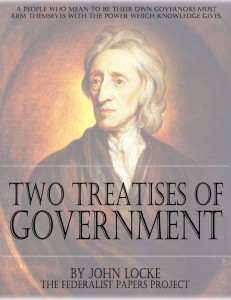 The First Treatise of Government is a criticism of Robert Filmer’s Patriarcha, which argues in support of the divine right of kings. According to Locke, Filmer cannot be correct because his theory holds that every man is born a slave to the natural born kings. Locke refuses to accept such a theory because of his belief in reason and in the ability of every man to virtuously govern himself according to God’s law.

The Second Treatise of Government is Locke’s proposed solution to the political upheaval in England and in other modern countries. This text laid the foundation for modern forms of democracy and for the Constitution of the United States.

To download your FREE copy of “The Two Treatises of Government” by John Locke please right mouse click on the link, then select “save as” and download to your computer – Two-Treatises-of-Government-by-John-Locke