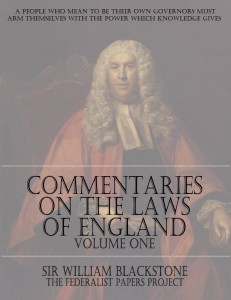 Perhaps the most important legal treatise ever written in the English language, Sir William Blackstone’s Commentaries on the Laws of England (1765-69) was the first effort to consolidate English common law into a unified and rational system. Clearly and elegantly written, the work achieved immediate renown and exerted a powerful influence on legal education both in England and America.

The Commentaries is divided into four books. The first, deals with what Blackstone called “the rights of persons,” what a modern lawyer would call constitutional law, the legal structure of government. Book II describes the law of property. Book III analyzes civil procedure and remedies. The last book is devoted to criminal law and procedure.

Now regarded as a literary, as well as a legal classic, Blackstone’s Commentaries brilliantly laid out the system of English law in the mid-eighteenth century, demonstrating that as a system of justice, it was comparable to Roman law and the civil law of the Continent. Ironically, the work also revealed to the colonists the insufficiency of the system and became a model for the legal system of the fledgling American nation in 1789.