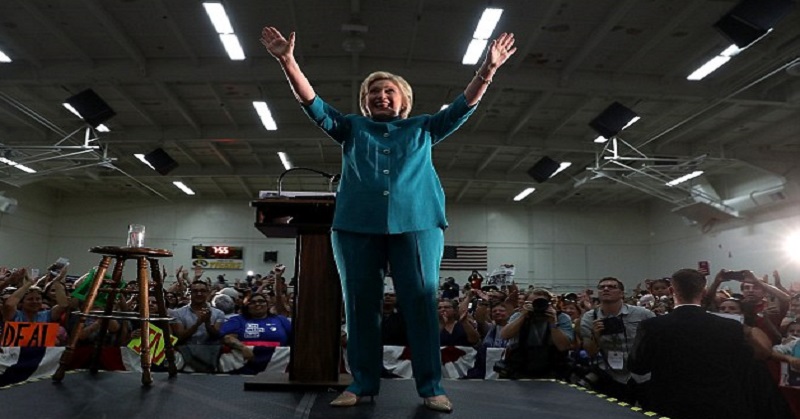 Donald J. Trump warned on Tuesday that gun rights supporters could take matters into their own hands if Hillary Clinton is elected president and appoints judges who favor stricter gun control measures.

Mr. Trump’s remarks were innocuous, but quickly elicited a wave of condemnation from Democrats, gun control advocates, and the press, who accused him of suggesting violence against the Democratic nominee.

Pushing the false narrative that Trump had called for her assassination, Hillary’s presidential campaign responded angrily to Donald Trump’s comments on the Second Amendment Tuesday.

"A person seeking to be the President of the United States should not suggest violence in any way." pic.twitter.com/Uu55CBCqdK

Ironically, Clinton herself was once accused of inciting Barack Obama’s assassination in comments she made during the 2008 presidential primary.

When Clinton was urged to get out of the 2008 primary race in light of Obama’s insurmountable lead, she she raised the memory of Robert F. Kennedy’s assassination and the possibility of Obama getting murdered as the reason why she remained in the race.

“My husband did not wrap up the nomination in 1992 until he won the California primary somewhere in the middle of June, right? We all remember Bobby Kennedy was assassinated in June in California. You know, I just don’t understand it and there’s lot of speculation about why it is,” Clinton said in a May 2008 interview.

From The New York Times:

Her remarks were met with quick criticism from the campaign of Senator Barack Obama, and within hours of making them Mrs. Clinton expressed regret, saying, “The Kennedys have been much on my mind the last days because of Senator Kennedy,” referring to the recent diagnosis of Senator Edward M. Kennedy’s brain tumor. She added, “And I regret that if my referencing that moment of trauma for our entire nation and in particular the Kennedy family was in any way offensive.”

“I guarantee you, Barack Obama ain’t taking my shotguns, so don’t buy that malarkey,” Biden said angrily. “They’re going to start peddling that to you. I got two, if he tries to fool with my Beretta, he’s got a problem.”

The left live in an alternate universe. They accuse Republicans of the very things of which Democrats are actually guilty.

When confronted with irrefutable proof about their hypocrisy, they just deny and go on with their delusions.

But, hey, it seems to work for them, their sheep never question.