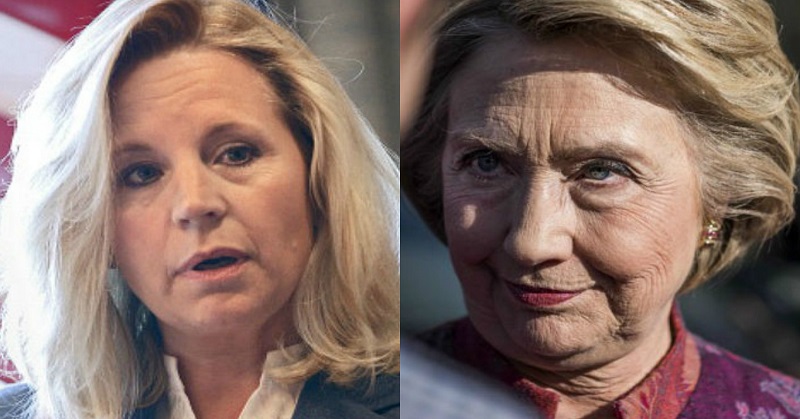 The US presidential election is merely 86 days away.

Polls aren’t reliable indicators or predictors of what the outcome will be.

Anything can happen in the next three months. It’s impossible accurately to gage public perception from a media that is blatantly and admittedly biased.

The MSM has glossed over the divisions within the Democrat party. Leaked emails proves the Democrat National Committee corroborated with the  Clinton campaign and the media to rig the primary race. This revelation has certainly exacerbated the anti-Hillary sentiment of the left wing base. Infuriated Bernie Sanders’ supporters showcased their disgust with Clinton during last month’s Democrat National Convention.

Raucous leftist protesters even heckled Clinton during her coronation speech, which she delivered to ahalf empty arena

Nonetheless, the left takes great joy in zooming in on the #NeverTrump faction of the Republican party.

The daughter of former Vice President Dick Cheney explained Friday why it is imperative that the nation unite behind Donald Trump and make him the next commander in chief.

Republicans who refuse to endorse Trump are they now sabotaging his campaign, Liz Cheney warned, and if they continue to do what they are doing they will they be responsible for supporting Hillary Clinton and the radical left wing agenda that is leading the U.S. astray.

“In Wyoming there’s no question for us that Hillary Clinton would be devastating — and far, far worse than Donald Trump. We’ve gotta unify behind him and make sure Hillary Clinton’s not elected.

“She is a felon. She … clearly violated the law with respect to her personal server and her lack of willingness to take care of the national security information of the nation … She is a woman who has a long history of not abiding by the law and of getting away with it.

“There is just a level of slime and sleaze associated with the Clinton family, and we know in Wyoming we’ve gotta do everything possible to make sure they never get anywhere near the Oval Office.”

“Obviously, she advocates failed policies, and obviously she’s in a situation where, you know, she will continue the devastating policies we’ve seen from President Obama,” Cheney said.

“She would be the most corrupt individual ever to sit in the Oval Office, if she’s elected. And she clearly believes she’s above the law. Obviously we know she will appoint Supreme Court justices who will undo and trample over so many of our constitutional rights …

The rest of the GOP needs to wake up.

The fate of the America is at stake.

We have never had the level of corruption that Hillary Clinton embodies in the White House before. Vote it out unless you want Sharia law and ISIS at your doorstep and Sodom and Gomorrah in the streets.

The ramifications are clear, either Trump or the most vile, corrupt, dishonest, pandering, leftist to ever run for office will become the next leader of the free world.

Even if you believe Trump has his foot in his mouth half the time, at least he cannot be bought and his goals aren’t to dismantle The Constitution of The United States of America and destroy capitalism.

Hillary will sell us to the highest bidder. Then she’ll move to Canada and live off all her millions because our country will not be worth living in.