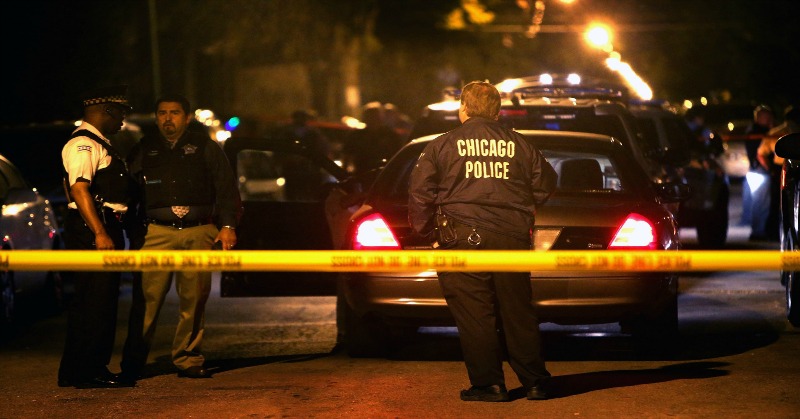 Another weekend of murder and shootings in the gun control lobby’s favorite place: Chicago.

Chicago indeed has a violence issue, and often the people performing acts of violence are using ILLEGAL firearms to do so. Of course, law-abiding citizens aren’t actually allowed to protect themselves with legal firearms, because gun control addicts have made it nearly impossible.

As a result, criminals run rampant; gun violence is prevalent and the gun control lobby continues to ignore it. They’d much rather spend money and time trying to push gun control in some of the safest states in the country like Vermont, Maine and New Hampshire.

At least 17 people, including four teenagers, were killed and 41 others were wounded in shootings across Chicago between Friday evening and Monday morning.

The weekend’s latest homicide happened shortly after 4 a.m. Monday in the Englewood neighborhood on the South Side. A 28-year-old man was found with gunshot wounds to the chest and head on the kitchen floor of a second-floor apartment in the 1100 block of West Garfield, according to Chicago Police. He was pronounced dead at the scene. The Cook County medical examiner’s office did not immediately provide information on fatality. Area South detectives are conducting a homicide investigation.

The latest nonfatal shooting happened shortly after 2 a.m. Monday in the South Chicago neighborhood. A 37-year-old woman was a passenger in a vehicle driving south in the 8000 block of South Exchange when she heard gunfire and realized she’d been shot in the left shoulder, police said. She later showed up at South Shore Hospital, where her condition was stabilized.

These tragic shootings and murders will continue because no one is doing anything to stop them. No one is discussing the real issues in places like Chicago where gun violence actually IS a problem, not because of firearms but because of people.

The gun control lobby ignores these violent acts because they refuse to discuss the real issues in inner cities. Why? They would have to admit that their masters of the Left have created these environments. Rather than admit the true issues – poverty, horrifying public education, and complete dependence on government – they prefer to ignore them and work on disarming law-abiding citizens.

Chicago is a prime example of how gun control fails. Gun control only enables criminals to create more victims. The gun control lobby and Democrats are literally partnering with criminals to continue victimizing law-abiding, innocent Americans by making it difficult for those innocent victims to protect themselves.

Criminals in Chicago have no fear because they know Democrats will keep protecting them, and will do absolutely nothing to stop their reign of terror.