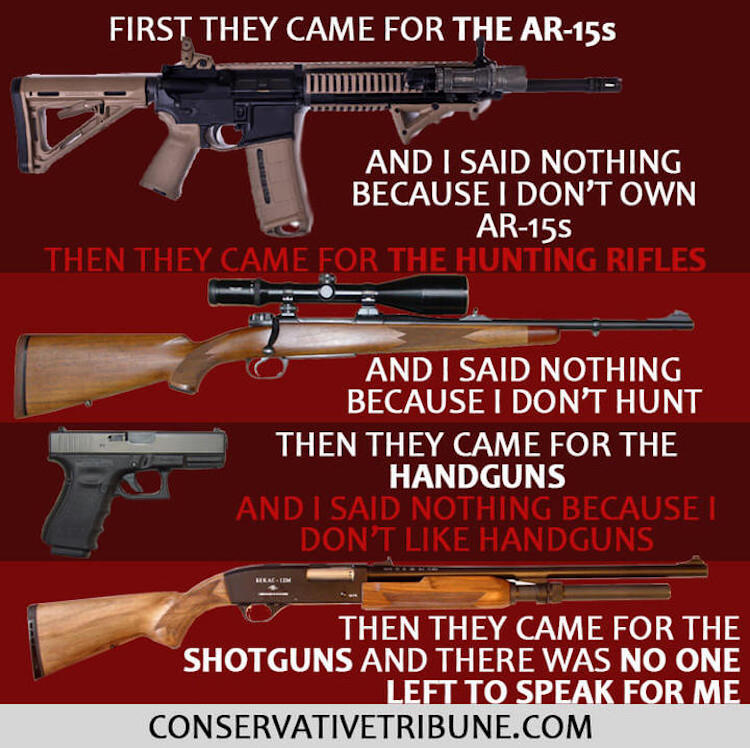 Major US Newspaper Calls For Gun Confiscation – by Brian Thomas

David Scharfenberg of the Boston Globe called for mass confiscations on guns on Friday, saying “there’s no way around it.”

Gun control lobbyists can pretend all they want that the measures they try today are in no way leading up to massive confiscations. But we all know what they really want.

Now, the Boston Globe has joined in on blaming regular Americans who’ve done nothing wrong for gun murders in the U.S. Scharfenberg’s op-ed actually suggests that taking guns away from law-abiding citizens is the best course of action.

And he’s talking about far more than just a limited ban on certain guns and devices.

“The time is now,” said Connecticut Senator Chris Murphy, “for Congress to shed its cowardly cover and do something.”

Trouble is, it’s not clear the “something” Democrats typically demand would make a real dent in the nation’s epidemic of gun violence.

Scharfenberg admits that even an all-out ban on so-called “assault weapons,” otherwise known as regular semi-automatic sporting rifles, would “account for just a tiny sliver” of overall firearm deaths.

Notice that Scharfenberg didn’t dare to directly suggest that an assault weapon ban would “prevent” anything.

At any rate, he ultimately suggests the real solution is “a more sweeping policy change.”

In other words, the proposals aren’t just difficult to enact in the current political climate; their practical effects would also be quite limited. On occasion, though, leading Democrats will make oblique reference to a more sweeping policy change: seizing a huge number of weapons from law-abiding citizens.

The logic of gun control lies, at bottom, in substantially reducing the number of deadly weapons on the street — and confiscation is far and away the most effective approach. Is there any conceivable turn of events in our politics that could make confiscation happen? And what would a mass seizure look like?

[…] Ultimately, if gun-control advocates really want to stanch the blood, there’s no way around it: They’ll have to persuade more people of the need to confiscate millions of those firearms, as radical as that idea may now seem.

So law-abiding gun owners just can’t be trusted with their property. They should be punished for the crimes they didn’t commit. The problem in America, Scharfenberg maintains, isn’t gang violence in cities. It’s regular people who simply aren’t responsible enough to own a gun.

Scharfenberg praises confiscation through federal “buybacks,” such as was seen by the formerly free people of Australia.

Make no mistake. “Buybacks” that pay much more than the price of the weapon are not a legislative compromise. They’re bribes enacted by governments who know nobody in their right minds would willingly forfeit their property without a substantial reward.

They, like any other form of confiscation, also have no effect on criminals, who regularly break the law and intend to continue doing so.

And this is why gun rights advocates fight any and all gun control measures so vehemently.

Scharfenberg is simply stating an endgame that we already know is on the agenda. Today, the boogieman is the so-called assault rifle. Tomorrow, it’ll be the semi-auto handgun. Then it’ll be the “sniper rifle,” which most of us know as a hunting rifle. Yes, they want the guns. They want them all, and they won’t be happy with any ground given until they have them all.

No, none of that matters.

All that matters is blaming the tool sufficiently that people will gladly give up their firearms so our betters can make decisions for us. They can keep us safe and sound…except they can’t. Even if they desperately wanted to, they can’t.

The United States isn’t England, Australia, or any other country on Earth. We do have the Second Amendment, and we do have massive numbers of people who will vocally defend that amendment, many with their lives if necessary, but more importantly, we have a different culture than those nations. That different culture means what may work over there won’t necessarily work over here.

Not that it matters, though. Democrats know damn good and well that trying to take all the guns is a non-starter, at least in one fell swoop. They know they need to take them incrementally.

Scharfenberg’s op-ed isn’t going to work right away in legislation. What he’s done, though, is admit the end-game for gun-control advocates who can’t say what they’re all thinking.

The steps we’re seeing today are incremental, and they lead to more worthless bans and confiscations that take from the honest and leave lawbreakers completely unaffected.