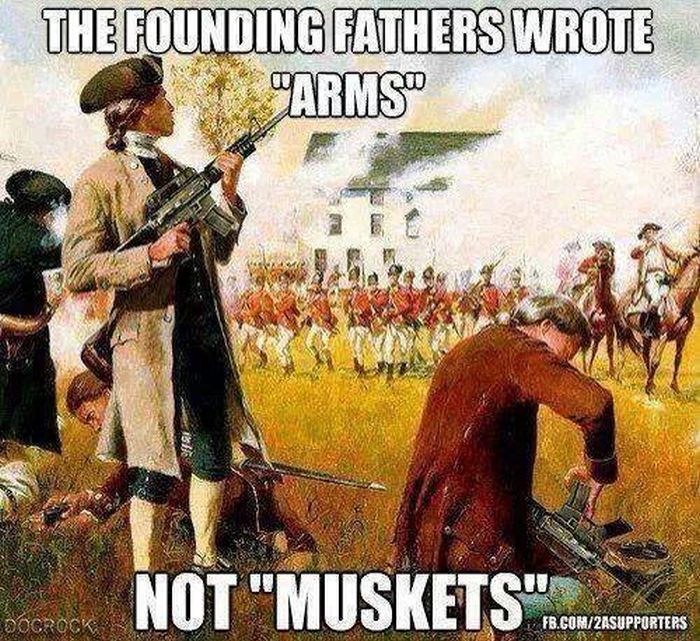 Steve King, a member of the United States House of Representatives, recently shared a meme declaring that the Founding Fathers “wrote ‘arms’ not ‘muskets'” in the Constitution.

A Representative from the state of Iowa, King says he provides “conservative leadership” as a family man “familiar with justice and the laws of government having grown up in a law enforcement family.”

King is sharing this meme to make sure that we do not fall into the Liberal trap of “historical context.” Why would you need the type of guns available today? The only thing the Founding Fathers were talking about were muskets.

The Federalist Papers Project agrees and gives a hearty “thank you” to Representative King. For example, the Girandoni rifle, created in 1779 during the time of Revolution and founding of this country, had “a 20 round magazine, fires a .46 caliber projectile and an effective range of 150 yards.”

The Founding Fathers did not restrict any type of gun from the Constitution then and we should not now today. As oneTFFP contributor wrote,

That’s like saying the First Amendment only applied to newspapers and speaking, really, really loudly, since there was no internet, no radio or television back then. Arms are arms. Speech is speech.

Granted-perhaps the average American shouldn’t be allowed to own a nuclear-tipped warhead or rocket launcher–and those are ‘arms’ too. But that conversation emanates from the Founders’ belief that ‘Congress shall make no law.’ The Supreme Court does allow for ‘reasonable’ restrictions…Just like we have on a First Amendment. But that’s it.

“The Second Amendment was written,” one TFPP contributor wrote, “so you would have the right to keep and bare arms not only in self defense, but to keep yourself safe from any form of tyrannical government. Don’t think the government could ever become so tyrannical that you would ever possibly need to resist said tyranny.”

From all of us at The Federalist Papers Project: Thank you, Steve King! Keep up the good work!